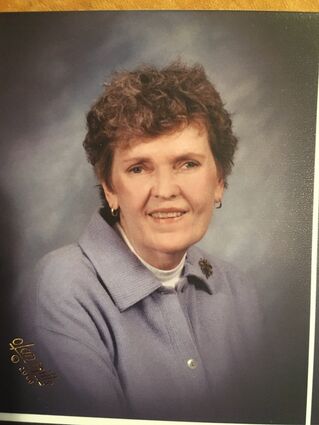 "Mary Louise Meteer Barr was born in Long Beach, California, on Jan. 22, 1937, and died in Seattle on Jan. 1, 2023. She had a full life and was grateful for her family, especially in her last years.

"According to her wishes, her ashes will be scattered nearby her husband's, whom she has sorely missed since Jer's death in 2015. There will be no memorial service, again at Mary Lou's request."

The above was hand-written by Mary Lou in September 2020 so her daughters "wouldn't have to deal with it later." Daughters Melinda and Jaye, however, know they could never convey the entirety of her life here, but feel more should be said.

Mary Lou was, in her youth, an accomplished, award-winning synchronized swimmer, a competitive skier, and later studied art, a skill she enjoyed until her health no longer allowed her to hold a paint brush.

Mary Lou met her husband, Jerry Dean Barr, in the late 1950s while she still lived in California with her mother, two brothers, and sister. Immediately after marrying, they moved to Jerry's home state of Illinois, initially landing in Chicago.

They then spent the bulk of their married life in the northwest suburb of Hoffman Estates, raising three daughters before they retired to Loudon, Tennessee, drawn there predominantly by the beauty of the landscape.

Both Mary Lou and Jerry loved to travel, and considered the years they spent in Tennessee to be their happiest, as they were still relatively healthy and had become empty nesters.

Mary Lou and Jerry moved to the Seattle area in their later years in order to be closer to their middle and youngest daughters and their families. They spent the remainder of their lives in the Pacific Northwest, cultivating close friendships and participating in their church.

After a long struggle with declining health, during which Mary Lou showed remarkable strength of spirit and a surprising sense of humor, daughters Melinda and Jaye were honored to hold vigil as she passed.

All who knew Mary Lou are relieved she is no longer in pain, yet she will be greatly missed.