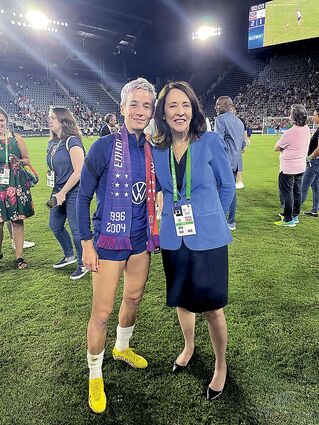 President Joe Biden on Feb. 5 signed the Cantwell-Capito Equal Pay for Team USA Act into law, ensuring all athletes who represent the United States in global competition – like the World Cup, Olympics and Paralympics – receive equal pay and benefits, regardless of gender.

"The Cantwell-Capito Equal Pay for Team USA Act officially became law," said Sen. Maria Cantwell, who lives in Edmonds when not in Washington, D.C. "From here on out, when women win, they no longer have to worry that a men's team will still somehow be paid more.

"This law requires that the U.S. Olympic and Paralympic Committee and sports' governing bodies provide the same pay, medical care, travel accommodations, and coverage of expenses to U.S. athletes regardless of gender – or risk decertification. With President Biden's signature, we're ensuring that when you wear the Team USA logo, you will truly be equal."

In 2022, the senators reintroduced the bipartisan bill, which passed the Committee with unanimous support on June 22, 2022, the eve of the 50th anniversary of Title IX.

The bill went on to pass the Senate unanimously on Dec. 8 and passed the House on Dec. 21 by a substantial margin.

After the House passage, Cantwell took to the Senate floor to thank the women who led the charge in U.S. Soccer that inspired the momentum of this legislation so all Team USA sports can benefit from equal pay and benefits.

"I also want to thank heroes like Megan Rapinoe and Alex Morgan who brought that case against U.S. Soccer. U.S. Women's Soccer led the charge after winning the World Cup and making it clear to everyone that women athletes deserve equal pay."