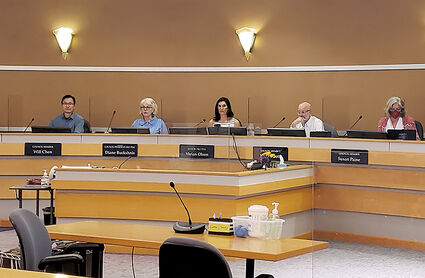 The Edmonds City Council on Tuesday unanimously agreed to adopt replacement language for its mission statement posted on the council website. The purpose? To highlight the nonpartisan nature of a municipal council.

Council President Vivian Olson initiated the change from the existing mission statement to a council roles statement on the website.

"The proposed roles statement would replace the mission statement that is currently on the city website that expressly asserts the nonpartisan nature of our mission," Olson said.

She explained in her introduction of the agenda item that while the current council positions are based on the Washington State Public Disclosure Commission's recommendations, the nonpartisan language is not stated in City code or on the City website.

"There does seem to be confusion among our councilmembers and also among our community members due to the fact that this has not been expressly stated and embraced," said Olson.

Councilmember Susan Paine suggested two language changes to the proposed council roles statement, including adding the word "representative" to describe the form of government, as well as inserting the word "external" to encompass the role of boards and commission within the City's purview.

Paine also suggested a council retreat might be a good venue to further discuss the issue.

"We as a group do need to discuss this, and I would suggest we do this in a retreat so we have some clear understanding," she said.

With the exception of Councilmember Laura Johnson, absent from the meeting, other councilmembers agreed that a retreat would be a way to further discuss the council's nonpartisan role.

"I like the idea of having a retreat to discuss and maybe come up with recommended behaviors for councilmembers to follow, said Councilmember Will Chen.

The resulting discussion of both Olson's proposed change, as well as Paine's suggested language additions, led to the adoption of a new statement for the website.

"As council, our job is to provide oversight and make sure things are done properly," said Councilmember Diane Buckshnis. "There are issues where we need to figure out the roles that we play. I think this is a good start."

While no date was indicated as to when the council would further discuss the nature of nonpartisan roles in city government, it was widely seen as a next step stemming from the change in the current mission statement to the council roles statement on the website.

The approved version: "As the legislative branch of a mayor-council, nonpartisan, representative form of government, seven part-time councilmembers are elected directly by the people to staggered four year terms. All positions represent the community at large.

"The City Council adopts the City budget, establishes law and policy, approves appropriations and contracts, levies taxes, and grants franchises. Councilmembers also represent the City on boards and commissions and to other organizations."