Graphite opens its doors in Edmonds

A space for artists, and a home for community interaction 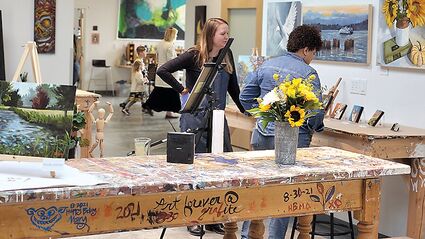 Johanne Friedrichs, left, and Lisa Myers Bulmash look at some of the miniature artworks Friedrichs created. Friedrichs also demonstrated her painting technique to visitors to Graphite.

Six years after a concept for a multiuse art hub was revealed, Graphite Arts Center opened its doors to the public for the first time during Art Walk Edmonds April 21.

It was the realization of a dream for Mary Olson, Graphite's founder and owner.

"It's fun to be able to see artists show their works and to open up their studios," Olson said as she strolled around the airy and open space. "I'm glad that everyone's having fun. That makes me happy."