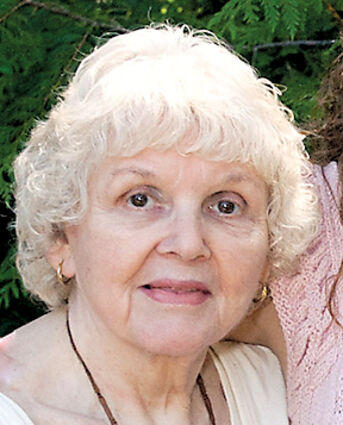 Gloria Ann Youngren Hoppler joined her Lord on March 22, 2022, in Olympia, Washington. She was 90 years old. A graveside service will be held for Gloria on Thursday, March 31 at 1:30 pm at the Edmonds Cemetery and Columbarium at 820 15th St. S.W. in Edmonds.

Gloria was born to Carl Youngren and Agnes Bell (Montgomery) Youngren on Oct. 25, 1931, in DeKalb, Illinois, but lived over 50 years in Western Washington, most of that time in Edmonds. She had one sister, Judith, who preceded her in death.

Gloria graduated from Joliet High School in 1949. She studied nursing at the University of Illinois, Cook County School of Nursing. Shortly after graduation she married Jarvis "Bud" Hoppler, her high school sweetheart. They had three children: Jann Marie in 1953, Craig Jarvis in 1956, and Wesley Carl in 1961.

In 1969, the family relocated to Lynnwood. Bud and Gloria divorced in 1974. Gloria moved to a house near downtown Edmonds.

Gloria returned to full-time nursing. To refresh her skills, she attended Coronary Care Nurse's Training at Cornell University Medical School in New York City. She worked at Harborview Hospital in Critical Care for many years.

In 1977, she was the first nurse at Harborview to become a Critical Care Registered Nurse (CCRN). She was a member of the staff of Stevens Hospital (now Swedish Edmonds Campus) for over 18 years, finally retiring at 72.

Gloria was honored by the American Association of Critical Care Nurses for over 30 years of continuous certification as a CCRN, one of only 35 nurses nationwide with that distinction.

Gloria was a confident and inspiring presence in any room. She had a big personality and a vision for every project she was a part of. She was always ready to take on a new challenge or hobby. Over her life, she became an integral part of many communities, and always believed in contributing to any group she joined.

Family was very important to Gloria. She nursed her mother and sister before their deaths and brought her father to live near her in Snohomish County when he was no longer able to live in his house in Illinois. Her deep love for her children and grandchildren will continue to be felt long after her passing.

Gloria was a life-long Lutheran, who held a strong faith in Jesus and was very involved in her church. After her retirement, she was active in Neighbors in Need, an outreach program of Trinity Lutheran church in Lynnwood, where she was a member of the congregation for many years.

Gloria had a lovely voice, and always sang in church and community choirs. She was a long-time member of the SnoKing Community Chorale. She was registrar and rehearsal manager of the Chorale for the first eight years of its existence.

While in Edmonds, she always had two dogs, short and long-haired collies, who were shown in competitions. She said that while some were champions, all were her good companions.

Gloria is survived by her three children: Jann and her husband, Bruce Treichler, of Olympia; Craig and his wife, Susan, of Federal Way, and Wesley of Ballard; and by her two grandchildren, Emily Brockway Hoppler Treichler of San Diego; and Kristina Elese Hoppler of Federal Way.

In lieu of flowers, donations may be made to the American Heart Association, [email protected]