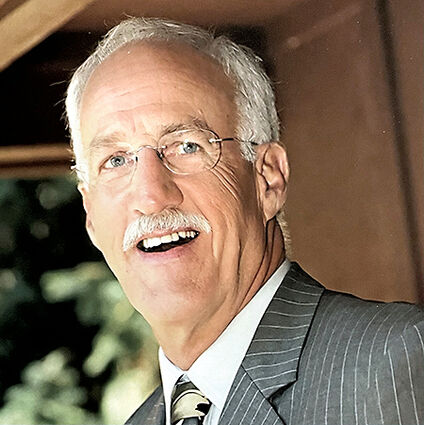 "I'd rather be sorry for something I've done," Ken Reid liked to joke, quoting one of his favorite Kristofferson songs, "than for something that I didn't do."

In that spirit, Ken lived a full life, rich with adventures and achievements, laughter, and love.

Kenneth Burd Reid, 77, of Edmonds, Washington, passed away on Feb. 12, 2022, after prolonged illness, with his beloved wife Barbara and his daughters by his side. Ken was born in 1944 in Honolulu, Hawaii, where his father was stationed with the U.S. Army Corps of Engineers.

When Ken was 2, his family moved to Edmonds, just up the hill and through the orchard from his grandparents' house. Ken loved family gatherings at saltwater beaches (and would later organize regular family reunions), chasing geoducks, fishing for salmon, and exploring with cousins and sisters. As a boy, Ken loved team sports and he continued to play well into his adulthood.

Ken graduated from Edmonds High School in 1962, and soon went to work with Reid Middleton & Associates, a civil engineering firm founded by his father, later helmed by Ken, and still highly regarded today.

As a strategic thinker, prudent businessperson, and convener of people and ideas, Ken was sought after for leadership roles in both private and public sectors, at local and state levels.

Ken was also an engaged community advocate, with a particular dedication to education and the arts. Throughout his career and into his retirement, he served on the board of directors for many local organizations, including Edmonds in Bloom Association; Edmonds School District Public Education Foundation; United Way of Snohomish County; the South Snohomish County Chamber of Commerce; the Lynnwood Rotary Club; Providence Regional Medical Center in Everett; Edmonds College; and most recently, he served as co-president for the Edmonds Arts Festival.

Ken's work earned him many accolades over the years, including the prestigious John M. Fluke Community Service Award from the South Snohomish County Chamber of Commerce. Ken was also named "Alumnus of the Year" for Edmonds-Woodway High School, and was inducted into the district's "Living Legends Hall of Fame."

Ken had three daughters, Lisa, Diana, and Angela, each his favorite. He coached their teams, encouraged their dreams, listened to their ideas, laughed at their jokes, and always had a clean handkerchief ready to dry their tears.

In 1991, Ken married Barbara, who shared his passions for education and the arts. He was proud of her accomplishments and inspired by her love of travel. Together, they explored the world, from Tahiti and Hawaii to Norway and Switzerland, with annual visits to Mexico.

Ken especially loved being at the family cabin in Winthrop, sipping whiskey with loved ones and playing his favorite musicians, including Creedence Clearwater Revival, Leonard Cohen, Cowboy Junkies, Eagles, Kris Kristofferson, and Lyle Lovett, many of whom he saw live in concert.

A man of pragmatism and resourcefulness, Ken researched every big purchase in Consumer Reports, or he just made it himself. Ken was a self-taught carpenter and all-around handyman, who built everything from birdhouses to his own two-story farmhouse in Edmonds' Perrinville neighborhood.

Every one of his homes (and most of his daughters' homes) has been improved by Ken's craftsmanship, from crown molding to cedar fences. Ken also rebuilt a 1950 Ford F1 pickup, which made appearances in several Edmonds 4th of July parades and later in front of Edmonds Automotive.

Ken was always discovering more to love about life – biking and hiking, snowshoeing and skiing, movies and music, plus Mariners games with Barbara, fishing and canoeing with friends, craft beers with his daughters, and any excuse to eat a burger at Rory's.

Perhaps influenced by the many teachers in his family, including his mother, Ken delighted in words – whether he was writing a witty letter, telling a well-timed joke, eschewing obfuscation with his vast vocabulary, or employing favorite expressions, like "perfect enough."

Ken was 6'4" with a deep baritone and deeply held opinions – about politics, religion, driving, dishwasher loading – yet he was not afraid to be tender, never too busy to help a loved one, and always the one the cats loved most.

Ken was predeceased by his parents, James H. and Jacqueline Burd Reid.

Arrangements were made locally by Beck's Tribute Center. Ken's ashes will be distributed by family in places he loved. There will be a celebration of Ken's life for his family, friends, and colleagues at 5 p.m. on Friday, April 8, at the Edmonds Waterfront Center.

In lieu of flowers, contributions may be made, in memory of Ken Reid, to the Edmonds College Foundation at 20000 68th Ave. West, Lynnwood, Washington 98036, or online at edmonds.edu/give.