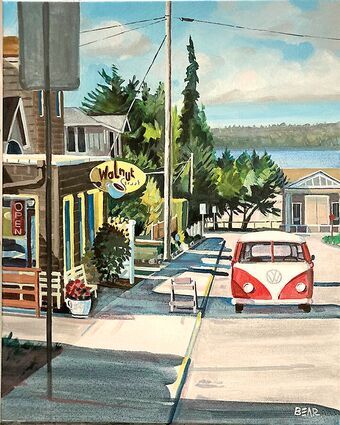 Newly arrived Bear Carpenter has already painted numerous images of Edmonds, including this one looking west on Walnut Street.

Bear Carpenter is a true Californian. He's a retired surfer. Also, his name. And the red VW van.

But now Bear Carpenter is an Edmonds kind of guy, and he's brought his passion with him. Not surfing, as Puget Sound's a dead zone for that kind of thing unless a stiff wind blows in.

It's his art, acrylic paintings that focus on his love for the sea, the coastal kind in California and inlet variety in Edmonds.

Carpenter's VW van is a constant in his paintings, whether parked by a California beach peeling perfect, tubular waves or now, in Edmonds, by Brackett's Landing North and Marina Beach Par...

Awesome. I can't wait to see a full show. So good... Welcome.