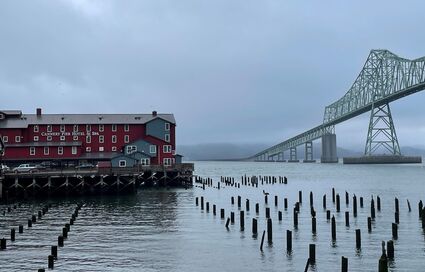 The Cannery Pier Hotel & Spa is built on top of 100-year-old piers and was designed to recreate the ambiance of the canneries of yesteryear. It's located right on the Columbia River next to the 4.1-mile-long Astoria-Megler Bridge, which connects Oregon to Washington.

If you're a movie buff, put Astoria, Ore., on your list. This Columbia River port town, where grit meets hip, has often been referred to as "Hollywood North."

Though it was "The Goonies," the cult classic that put the city on the map back in 1985, there have been a number of other pictures filmed in the area over the years, including "Kindergarten Cop," "Short Circuit," "Free Willy" and "Teenage Mutant Turtles 3."

To learn about the cinematic scene, stop in at the Oregon Film Museum. Housed in the historic Clatsop County Jail, which served as the site of the jailbreak in "The Goonies," this tiny museum provides information about Hollywood's footprint in Oregon, and offers visitors a chance to get in front of and behind the camera for their own turn at stardom. Before leaving, grab a map of scene locations and set off to discover some of the sites.

As to why Astoria is sought after by everyone from Steven Spielberg to Arnold Schwarzenegger, the answer is obvious as you explore this Northwest gem. Breathtaking views are everywhere, with an array of versatile locales that can pass for everything from Mayberry-like towns to even ancient Japan.

Astoria is surrounded by forests, overlooks the Columbia River and is a stone's throw away from the ocean. Quaint Victorian homes dot the town's steep hillside, while downtown has numerous buildings on the National Register of Historic Places.

The city's roots are deep, as it was founded in 1811, and has the claim of being the first permanent U.S. settlement on the Pacific Coast.

To delve into Astoria's past, head to the Flavel House Museum, an 1885 Queen Anne-style grand dame that was built by a Columbia River Bar pilot. Inside, you'll find original woodwork, period furnishings, elaborate hand-carved mantels and towering ceilings embellished with plaster medallions. There's a formal parlor, music room, library, dining room and conservatory on the first floor, and five bedrooms on the second.

Take a peek in the Liberty Theater, a historic Vaudeville theater and cinema where Clark Gable once performed. The venue continues to have a viable presence in the community, offering a series of productions each year.

Don't miss the Astoria Column, the city's most popular landmark. Built in 1926, it tells the story of the history of the area via a colorful mural painted around its 125-foot-tall structure. Climb the 164 winding steps to the top for jaw-dropping, 369-degree views of the river, ocean and town.

Nearby Fort Clatsop provides another dose of history. Built by Lewis and Clark and the Corps of Discovery back in 1805, it served as a winter shelter for the explorers. Today, there's a replica of the fort onsite and a visitor center with exhibits and orientation films.

Driving across the 4.1-mile-long Astoria-Megler Bridge is another highlight. The bridge, which connects Oregon to Washington, has the distinction of being the longest continuous truss bridge in North America.

Head to the Columbia River Maritime Museum for a crash course on fishing, shipping and military history. This renowned institution is chockful of fascinating exhibits. You'll learn, for example, that mariners refer to the Columbia River Bar as the Graveyard of the Pacific. This perilous area is where the Columbia and Pacific Ocean meet. A whopping 2,000 ships have sunk here, and 700 people have lost their lives.

You'll gain renewed respect for the U.S. Coast Guard after spending time among the displays about those individuals who train to be rough-water rescuers at Cape Disappointment.

You can also take a stab at predicting the weather, observe a full-size fishing troller at work, explore a retired pilot boat, and take a self-guided tour of a floating lightship.

Stroll along the Astoria Riverwalk to indulge in fabulous vistas of the bay and the bridge. Observing large freighters pass under the bridge never gets old. Nor does being amused by the sea lions chilling out harborside.

I made the Cannery Pier Hotel & Spa home base during my visit. This luxury boutique property is built on top of 100-year-old piers and was designed to recreate the ambiance of the canneries of yesteryear. The location alone is unbeatable, as it's right on the river next to the bridge. Every room has a view and private balcony, so you're never far from watching the river traffic go by through the shipping channel or espying wildlife.

Rooms are spacious and well-appointed. A complimentary continental breakfast is provided, as well as a happy hour with regional wine and hors d'oeuvres. You also have use of cruiser bicycles, a hot tub, Finnish sauna and exercise room. Plus, there's an onsite spa to up the relaxation ante. And to top it off, guests can take advantage of the complimentary vintage chauffeur car service to drive them anywhere in town – in style.

The hotel will soon undergo a transformation to expand the property and debut a new bar and restaurant concept. Plans also include enhancements to the spa and fitness areas.