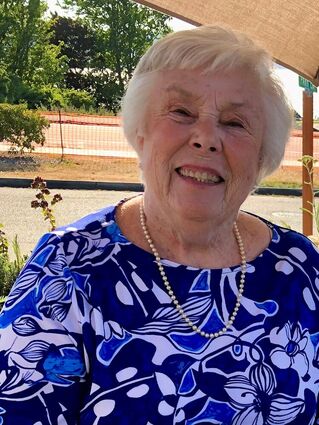 Sharon was known to her friends and family as kind, extremely giving and helpful, as well as a bit feisty. She enjoyed flower gardening, relaxing at Edmonds Beach, researching her family genealogy, and spending time with her children, grandchildren, and great-grandchildren.

Together with her husband Bob, she had fun with various senior softball leagues, petanque games, and even the bingo hall.

Much of her adult life revolved around supporting children. Sharon worked for the Edmonds School District for many years, starting as a playground teacher at Edmonds Elementary in the '60s, followed by office administration at Edmonds Junior High School, Edmonds High, and ending her career at Terrace Park Elementary.

Today, 45 years later, many former students remember Sharon fondly. Some sentiments include: "... always smiling and kind," "... your mom was loved by so many of us!," "She was such a positive influence on me at a time when I really needed it," and "A bright spot in the world!"

In addition, she spent years working and volunteering for the Seattle Skating Club.

Sharon is survived by daughters Lori; Kim (Steve); Kelli (Russ); six grandchildren; and four great-grandchildren. She was preceded in death by her husband, Bob Hetzel, and son-in-law, Robert Kutrich.

A celebration of life will be held on Saturday, Feb. 5, at 10:30 a.m., at North Sound Church, 201 Fourth Ave. N., Edmonds. In lieu of flowers, consider donating to St. Jude's Research Hospital or the American Heart Association.