Will Chen among councilmembers wanting to cut streatery fee in half

It's not over yet 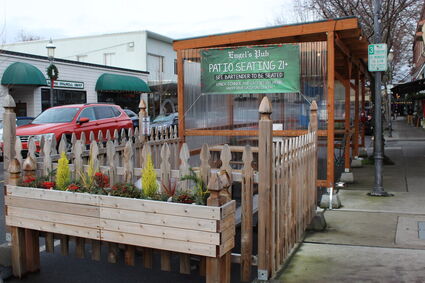 The streatery at Engel's Pub on Fifth Avenue South in Edmonds.

The proposed changes include:

• Allowing the fee to be paid in monthly installments, and

It was on Dec. 17 that Adrienne Fraley-Monillas, Laura Johnson, Susan Paine, Kristiana Johnson, and Will Chen voted yes on the amendment to extend the streateries ordinance for four months and to charge restaurant a $4,000 one-time fee to continue using the streateries.

Voting no were Diane Buckshnis and Vivian Olson; they wanted the streateries to end by Dec. 31, when the ordinance was originally supposed to sunset.

After hearing negative comments on his $4,000 fee, Chen later during the Dec. 17 meeting, proposed to cut the fee in half, to $2,000. But the motion died for a lack of a second.

Earlier this month, the City of Edmonds pushed for the 6-month extension, and Mayor Mike Nelson supported it as well.

On Dec. 17, that main motion – a 6-month extension – was amended by Councilmember Will Chen.