By Brian Soergel and Em Helena 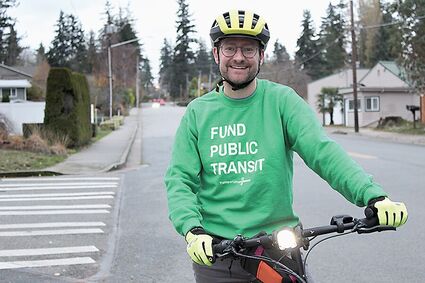 Former Councilmember Luke Distelhorst, a big supporter of bike lanes, rides his bike west on Bowdoin Way, where bike lanes will be added to both sides of the street.

Bicycle riders – both of the pedal and electric variety – will find getting around Edmonds a little easier next year as the City Council last week approved the final stages of planning a bike lane project.

With the design phase scheduled to be completed in the spring, construction is scheduled for summer and completion by the end of next year.

But while some bicyclists rejoice at the marked lanes coming to strategic points in the city, others say they are a waste of money. When's the last time you saw someone riding a bike in Edmonds, a ferry town with hills and increasing vehicle traffic?

The bike lanes will be in several locations:

Last week, the bulk of the conversation between City staff and councilmembers centered on the busy 100th/Edmonds Way (SR 104) intersection at Westgate. There were two options on the table.

City staff wanted alternative two, which includes reducing the width of vehicle lanes to allow the installation of a northbound bicycle lane and sharrows in the southbound direction. New ramps would be installed so bicyclists who are not comfortable traveling in a lane would have access to the sidewalk. There was an estimated delay time of 2.4 seconds for motorists during peak hours, according to Ryan Hague, capital projects manager for the City.

That was not the option wanted by Council President Susan Paine and Councilmembers Laura Johnson and Adrienne Fraley-Monillas. They preferred alternative one, where one thru-lane is eliminated in each direction, and would have an estimated delay time of 28 seconds for motorists during peak hours.

"The few seconds of delay for a few hours of the day is an acceptable trade-off," said Laura Johnson.

Beyond the expansion of pedestrian and bike access for the community, former Councilmember Luke Distelhorst also touted the climate and economic benefits of providing accessible active transportation options.

Distelhorst, an avid bike rider, was a leading champion of the project, and has said that alternative one would be the safest for cyclists.

"Getting people out of cars will reduce our emissions and runoff pollution, such as tire and brake dust, which is impacting Puget Sound and salmon recovery efforts," he said early last month.

"Implementing our Complete Streets Code (requiring new transportation projects to balance the needs of all users, including pedestrians, bicyclists, and transit users) will help provide more, safe transportation options that also are more financially responsible and do not require the same level of maintenance that our roads do."

A study conducted by University of Colorado Denver researchers Nick Ferenchak and Wesley Marshal (bit.ly/31aWH2r) reported that sharrows – as are coming with alternative two – are rarely considered bike infrastructure. They can provide a sense of false security to bikers, which in turn may lead to a higher risk of accidents, the report noted.

But the two alternatives swung on a crucial vote from Will Chen in his first council meeting. Chen won last month's general election and took the seat of incumbent Distelhorst, who was appointed last year to fill the Position 2 term of Mike Nelson, who successfully ran for mayor.

John Wilczynski, a retired airline captain and Edmonds resident, has followed the bike lane project closely, concerned about the impact on traffic. He lives on Ninth Avenue South.

"Honestly, my first thought about adding bike lanes was how can it help reduce the continually increasing vehicle speed on Ninth Avenue that has become readily apparent over the last several years with very little police presence to mitigate it. To that end, if the plan had bike lanes like those on 76th (a zigzag pattern) I would have been more amenable."

Wilczynski said he became frustrated by the consultants and councilmembers taking what he said was a stance that the public input portion was nothing more than a nuisance requirement to get through approval as fast as possible.

"The best example of this was the option first presented that would have gotten rid of parking on both sides of the street, which was 100% rejected by every citizen who voiced an opinion. Yet it still showed up as the first option in the second round of plans. "While it wasn't the final choice, its reappearance solidified the appearance of disregard for our opinions. A disregard that I believe was reflected in the firing of several City councilmembers in the last vote.

"All of this led me to go from initially being OK with some type of bike lane to completely being negative to any bike lane additions."

The Edmonds Bicycle Advocacy Group (EBAG) has been a crucial source of support for the bike lane project.

EBAG, founded in 1994, is a nonprofit group with the stated goal of raising the visibility and accessibility of bicycling in Edmonds. Recently, its efforts have included expanding the "Let's Go" program in local schools, which teaches pedestrian and bike safety for grades three through six.

The Edmonds Citywide Bicycle Improvement Project is a key focus for the advocacy group, as it will double the current 8-mile length of city bike lanes, providing what EBAG says will be greater and safer bike access to local parks, businesses, schools, and neighborhoods.

"I think the project is important for the city because it makes bicycle riding safer and more visible," said John Larpenteur, a life-long cyclist and EBAG treasurer.

"It gets more folks outside exercising. It also enhances that small-town feel that makes Edmonds special. If an Edmonds family chooses to ride their bicycles to the Edmonds summer market, they can have fun exercising to commute to a community event."

The advocacy group worked closely with the City, showing its support at public forums while providing feedback throughout development.

The City hired Blueline, Inc., to study and make recommendations on parking and traffic data in the areas where bike lanes were to be considered.

EBAG is one of many project supporters. At one of the initial open forums hosted by Sound Transit in fall 2019, residents received a public opinion survey. Results showed that over 60% of the 300 respondents considered the project an important improvement to Edmonds.

None of these improvements were part of the original project, and they would require additional City funds to install, which would come from real estate excise tax (REET) funds to pay for the extra design and construction costs, estimated at $312,000.

Councilmembers approved the additional projects 6-1, with Kristiana Johnson voting no.

– Pedestrian improvement at Ninth Avenue South and Pine Street: Rectangular rapid flashing beacons (RRFB) will be added to this intersection, along with curb ramp upgrades and, if possible, curb bulb-outs. 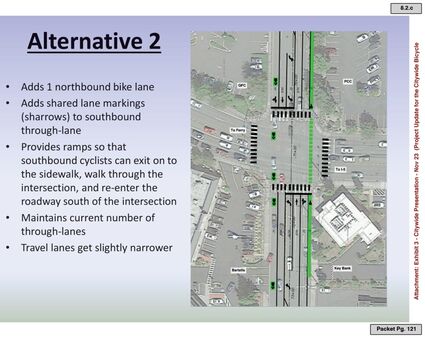 – Pedestrian Improvements on Bowdoin Way: New striped crosswalk with flashing beacons will be added with curb ramp upgrades and, if possible, curb bulb-outs. Improvements will be at 90th Ave West or Pioneer Way. Exact location to be determined during design.

– Pedestrian Improvement at 100th Ave South, 224th Street West, and 14th Street West: New striped crosswalk with flashing beacons will be added to this intersection along with curb ramp upgrades. and, if possible, curb bulb-outs.

– Pedestrian Improvement, former Woodway High School Entrance at 100th Avenue West: Crosswalk will be moved from the north side of the intersection to the south side. This will optimize traffic flows during peak periods and reduce the amount of red light time needed for north- and southbound traffic.

– Contributor Em Helena is a student in the University of Washington News Lab.

This is great news. I've recently moved to Edmonds and plan on getting a bike so as to reduce the need to drive around town only when necessary. The argument that there aren't enough bike riders in Edmonds to warrant bike lines is spurious, we need to envision a future that encourages alternative forms of transit and hopefully this helps others to consider biking.

On 80th Ave W 5 days ago driving N from 220th I came upon a non english speaking woman and her strollered infant and 9 year old boy were walking down the middle of the street due to the condition of those sidewalks. Cars were zipping S and behind me. I was scared for the woman so I pulled into opposite lane stopped the traffic and her son translated for me. I was very very nice and told them I was worried about them as cars go fast here now. She responded and smiled and moved to the sidewalk. I then when sure they were safe came home. You still think Bike Lanes are more important than people...I don't. I also think the statement that this will make people drive Bikes and motorized trikes in the rain or without to Bike instead of drive HERE. No it won't and they are right I never see Bikes up here. Never...Yet this is what we spent for a very few percentage wise bicycle enthusiasts. I am offended and also offended for this very sweet woman and her children. Pitiful...