Economic Development director to leave at end of year 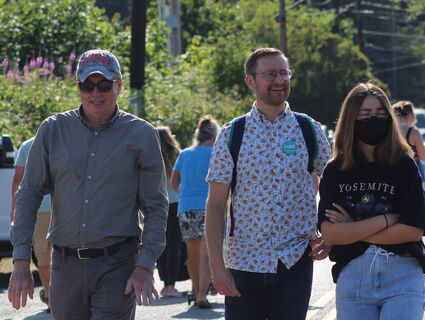 After four decades of public service, including seven years in the role of Economic and Community Services Director for the City of Edmonds, Patrick Doherty announced plans to retire at theend of 2021.

"The past seven-plus years serving the Edmonds community has been an amazing and rewarding experience. It's been the perfect capstone to my 40-year career in public service. I am proud of all the work my colleagues and I have accomplished, under the leadership of Mayors Nelson and Earling and the City Council, during my time here," Doherty said.

He added, "We have put in place many programs and initiatives that have furthered our goals of creating and maintaining an economically healthy, informed, equitable and engaged community of residents, visitors and businesses owners."

After earning both bachelor's and master's degrees in urban planning, Doherty started his career in Los Gatos, Calif., in September 1981, going on to serve in various other cities in the country before coming to Edmonds, but most notably for almost 17 years at the City of Seattle as its design review manager and 13 years at the City of Federal Way as its community and economic development director.

Remarking on Patrick's time with the City of Edmonds, Mayor Mike Nelson said: "Patrick has been an integral part of our City administration for the past seven years, bringing a wealth of knowledge to his role and helping to lead us in favorable economic growth and increased community engagement."

He continued: "I greatly appreciate his service to our City. I will miss working with Patrick and wish him an enjoyable retirement."

Initially appointed by Mayor Dave Earling, Patrick started with City of Edmonds in July of 2014 to serve as economic development and community services director.

As time went on, additional initiatives and programs were added to Doherty's plate, such as the Diversity Commission and its programs and the Creative District. He and Arts and Culture Manager Frances Chapin worked to achieve Creative District designation of the greater Edmonds downtown area – the first such designation in Washington state.

Under the mayor's direction, many special projects have also occupied Patrick's attention over the years.

Since the start of the COVID-19 pandemic, Doherty has provided leadership to the City's interdepartmental emergency response team, as well as stewardship first of the City's CARES Act federal funds disbursement and, more recently, the ARPA funds disbursements – in the form of grants to households, businesses, local colleges, local nonprofits, etc.

The recruitment process will begin shortly to fill the Economic and Community Services Director position. It is expected that process will culminate in the first part of the new year. Ultimately, the Mayor will appoint a new director, subject to City Council confirmation.

When asked how he plans to enjoy his time post-retirement, Doherty replied, "I have so many ideas, ranging from volunteer work to travel, from studies to more hiking, from more time with friends and family to the possibility of some part-time work. I expect I'll be just as busy!"