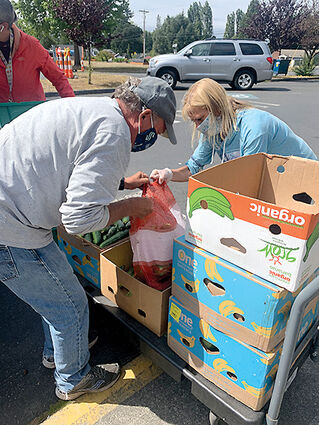 Walking through the Edmonds Food Bank's facilities, it is clear that the organization has grown substantially since its humble beginnings in a single church closet over four decades ago.

Walk-in coolers and freezers are filled with fresh produce; boxes of food are organized in tall stacks; and an industrial scale is used to weigh food items as part of the detailed intake process.

The food bank's evolution is especially impressive considering that the entire facility is located in the basement of the Edmonds United Methodist Church on Caspers Street, which has been the home of the organization since its inception.

Now, the food bank is in search of a new home to add programs and serve the community in even better ways.

Casey Davis, named executive director of the Edmonds Food Bank in 2018, said the food bank is looking into finding property that would eventually become its new location.

The desire to relocate is mainly due to a lack of space.

Looking at the cramped food storage areas filled with boxes stacked up almost to the ceiling and the shelves and cabinets that serve as the food bank's office area, the need for a larger space is apparent.

Another problem with the current space is the layout, which is not very conducive to the grocery store environment the food bank provides to its customers, said Davis, who said whatever happens the food bank will still be able to serve the community at the same level it is now.

She added that the layout creates challenges that make some operations less streamlined and effective, limits the food bank's hours and the number of services it can provide at one time, and makes following safety guidelines more complicated.

With a more effective facility, Davis says the food bank could evolve further, expanding its reach to do more than provide food.

Her vision goes beyond the traditional idea of what a food bank does. "We're not trying to build just a food bank; we're trying to create a community engagement space."

By providing community members with a location where they can access a diverse array of tools and resources provided by community partner organizations, said Davis, the food bank would support its customers in ways that could benefit them long after they graduate into food security.

She believes this approach will reduce food insecurity in the community, ultimately lowering the number of people in need of the food bank's services. Though it might seem contradictory to develop an entirely new facility with the goal of having fewer customers, said Davis, the new space would offer much more than just food distribution.

If fewer people rely on the food bank for meals and groceries, other services could move to the forefront.

Davis said one of the ways the new location could serve the community, other than providing food, is to offer education and training on practical skills and topics.

One example she gave was bringing in a master gardener to teach a class about how to create an edible garden. Davis pictures the new facility as a "green space," with edible plants growing all around the area and customers being able to grow their own produce.

She said that while providing the community with a multifaceted system of support would reduce food insecurity, the issue will never disappear entirely.

"We're never going to get to zero. There are always going to be people moving into and exiting food insecurity."

If economic changes were to result in an increase in the number of community members in need of food, the facility would be able to quickly transition back to focusing on food distribution, said Davis. 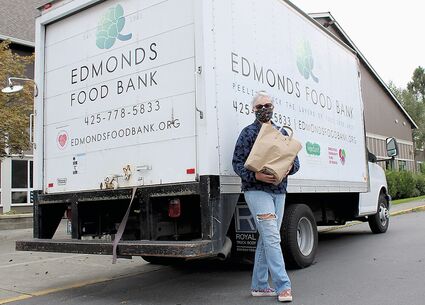 Casey Davis and the Edmonds Food Bank were named Citizens of the Year in 2020 for helping those with food insecurity in Edmonds and the surrounding area.

To make this nonprofit network a reality, the Edmonds Food Bank would collaborate with other organizations and individuals outside of the food bank. "Our primary goal will be getting food to people, but equally as important is to find partners that will bring the services that are needed."

She said this is a more effective method than trying to turn the food bank into a broad organization that attempts to encompass a wide range of services in different fields.

Still, she and the other food bank employees and volunteers are committed to doing everything they can to serve the community however and wherever it needs it most, no matter the food bank's address.

She is hopeful that this vision will soon become a reality. Until then, the Edmonds Food Bank is sticking to its roots.