A sign for the past: Steve Christiansen has a small 3-bedroom home. He likes it that way 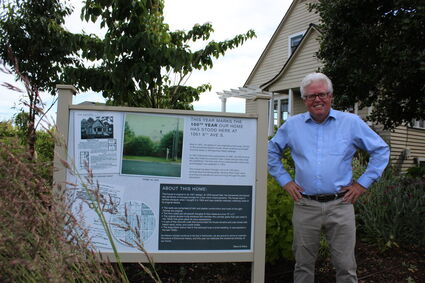 Steve Christiansen had a sign made to celebrate his 1921 home in Edmonds.

For as long as Steve Christiansen has lived in his house on the north corner of Sixth Avenue South and Fir Street, neighbors and passers-by have shared their appreciation of what he #hasn't# done to it.

It's a 100-year-old, 1,250-square-foot, three-bedroom, one-bath home on a large lot. No wing additions. No remodel. No accessory dwelling units.

George Brackett, who died in 1927, would still recognize it.

So why the neighborly love?

Since 1921, when Sixth Avenue South was a lonely county road, the house has stood defiantly amid a growing cluster of mini- and maxi-mansions in Edmonds, often four or more to a lot smaller than Sixth and Fir.

Because of his house's popularity among neighbors, Christiansen planned to invite them to a 100-year celebration this year. But COVID.

"I decided I wanted to try to recognize the home in some way," said Christiansen, who lives with his girlfriend, Diane, and a dog. After conducting research, he approached Lillyan Hendershot at Edmonds' Branding Iron to commission an explanatory sign to plant on his front lawn.

"The response has been positive," said Christiansen, who works for a company manufacturing functional hardware for the kitchen and bath industry.

"What came to me was you recognize a lot of people admire someone who maintains a house like this. It's the same thing if you go to downtown Edmonds and you see a beautiful '53 Buick all restored. I mean, it turns heads."

Christiansen has made a few necessary upgrades: the kitchen, a new roof, fresh paint, new plumbing, some electrical work, copper piping to replace the original galvanized steel. But the windows and many light fixtures remain, there's no insulation, the lathe-and-plaster walls are holding up, and much of the original knob-and-tube wiring still works.

What the future holds

Christiansen purchased the home in 1994 for about $150,000, but says the house and property might fetch up to $900,000 these days. That being said, he has no illusions about what would happen to the corner lot when or if he decides to put it on the market.

"I'd like to think somebody would carry on the quality of the home and keep it as is, but you can't prevent it," he said. "I mean, if there's going to be a builder or contractor come in, most likely they'll demolish it. I know if I go to the very top of my roof and clean the chimney, I've got a beautiful 180-degree view of the Sound. You know someone's going to capitalize on that."

Christiansen said he hasn't thought about adding the home to the city's Register of Historic Places, designed to help preserve the character of Edmonds' past.

According to Edmonds' city code, however, someone who buys a home on the register can request a waiver leading to demolition.

"If a register property were demolished, we would also follow through with an ordinance removing the property from the historic register and the zoning map as well," said Kernen Lien from the City's Planning Division.

Christiansen knows his house will eventually pass into Edmonds' history.

"It's kind of funny. People really admire an old home. I know people who have older homes, and it's a huge passion. You have to be pretty creative and resourceful because you're dealing with 100-year-old construction. You can't just run to Home Depot and get a part; everything has to be custom made, or you have to go on a hunt to find a component, or a hinge."

If the home is eventually torn down, it would just be another inevitability of Edmonds' metamorphosis into ... something else.

"Like any small city or small town, there's been a lot of growth in Edmonds, especially in the last 10 years," Christiansen said. "And I think what I see more than anything is that a lot of the character of the city is changing.

"A neighborhood or city is really defined by its architecture. More and more now, you're seeing fewer and fewer older homes. Very rarely does someone invest in an old home, restore it, and maintain it. It's really easy to tear it down, either to gain a better view or a larger footprint."

It doesn't have to be like that. Citizens speak up, and mayors and councilmembers listen or are forced to get out of the way.

"Look at Seattle, like in Queen Anne and Capitol Hill, where there's huge neighborhoods and nothing but older homes," he said. 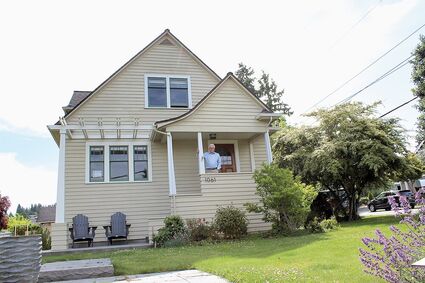 Steve Christiansen's 1921 home, at Sixth and Fir, remains largely the same as it was 100 years ago.

"They try to maintain that in that region. But up here in Edmonds, there's a lot of growth and density. It's about the value, right? You know, can we put three homes on a lot instead of just one?"

Nice place. I bet its worth a lot more than that... Register it so it can't be sold. Then turn it into one of those rb&b's or what ever they are called. With a view you could get high dollar a night for that sweetie (meaning the house not you) :) 250 a night X 7 about what 6 grand a month. Depost required for cleaning. DO it. HAHA