Edmonds gets a tsunami warning siren

Is the city at risk? 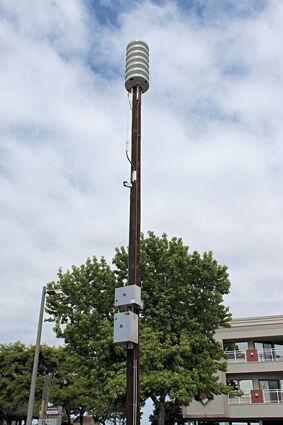 A tsunami siren has been installed in the parking lot by Olympic Beach in Edmonds.

Could the Big Rip, a 9.0 magnitude earthquake generated by the Cascadia Subduction Zone parallel to the Washington coast, affect Edmonds?

"Edmonds," he said simply, "is at risk from tsunamis."

A recent study with maps showing the risk in Puget Sound from a tsunami caused by a Cascadia Subduction Zone earthquake was released in April. Low-lying areas near Edmonds' shoreline – like most of central Puget Sound – showed "shoreline where inundation is inferred but not quantified."

But when such a frightening scenario does eventually happen – experts say it's a certainty with subduction zones – Edmonds residents near the Sound could get a warning hours before tsunami waves strike if a quake occurs miles from shore, or sooner if the subduction zone breaks.

According to the WEMD, if a tsunami occurs, the sirens supply audible and visual warnings of the impending danger via a wailing audio sound and an intense blue light for the hearing impaired, which can also cut through fog and is visible from a long distance.

According to the Washington State Department of Natural Resources, residents along central Puget Sound's shorelines would have "minutes to tens of minutes" to evacuate if the Cascadia Subduction Zone breaks.

The siren will be tested on the first Monday of every month at noon, playing the familiar "Westminster Chimes" melody –check out the sound at http://www.bit.ly/3h1Vsa6. The sirens are also tested once a year, with the actual wail sound on the third Thursday in October in conjunction with the Great Washington ShakeOut.

For the yearly test, the wail sound will be followed by a voice message in English and Spanish explaining that it is only a test.

The City recently posted a job notice for a safety and disaster coordinator that would pay between $76,000 and $102,000 a year.

The safety and disaster coordinator would be responsible for coordinating and implementing drills and exercises for City employees and for the development and maintenance of the CEMP.

According to the CEMP, http://www.bit.ly/2SZSZER: "Disasters and emergencies have occurred in Edmonds and will likely occur again in the future. Through a process of hazard vulnerability analysis it has been determined that the City of Edmonds is vulnerable to numerous technological, natural, and human caused hazards.

To receive notifications when a tweet from @NWS_NTWC is sent, you must choose to be notified within the Twitter app on your mobile device and/or through http://www.twitter.com.