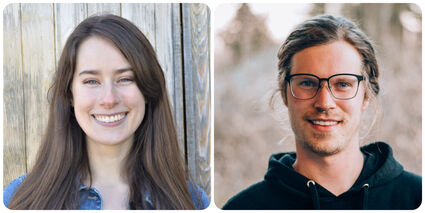 Edmonds College students Kelsey Dunlap and Brian Matson were honored as members of the 2021 All-Washington Academic Team at a virtual ceremony April 15.

The ceremony was shared as a video premiere at spscc.edu/AllWa.

All team members receive $250 scholarships from KeyBank, and they are eligible for other scholarships based on their rankings by Phi Theta Kappa. Many four-year colleges and universities also offer scholarships to members who choose to transfer.

She also ranked among the top 200 transfer students nationwide and was selected as a 2021 Coca-Cola Academic Team Gold Scholar, earning her an additional $1,500 scholarship.

Dunlap entered the field of health care at 17 as an apprentice doula. She has since attended over 80 births, volunteered in the emergency department at Swedish Edmonds, and served as a medical coordinator for Jewish Voice Ministries International in Zimbabwe.

She is earning her associate degree in pre-nursing from Edmonds College and plans to get her bachelor of science degree in nursing.

"Whatever skills I gain, I would like them to be useful in settings where communities have limited resources," said Dunlap. "My goal is to be a diligent, capable, kind, compassionate, encouraging, and skilled nurse who rises to each occasion and keeps her eyes on the things that matter."

Matson has loved the forests of the Pacific Northwest since he was a child, and said he has always wanted to make a career out of that passion. He has a bachelor's degree in ecology from Evergreen State College and is currently working towards his associate degree in landscape design at Edmonds College.

He plans to start a landscape design company after graduating.

"With so much land being owned privately, impacting homeowners gardens is an effective way to create environmental change on the local level," said Matson.

"My goal is to design and build gardens that minimize water and resource usage, are fully organic, generate food for the client, provide wildlife habitat, and create a sense of place in the region by utilizing native plants."