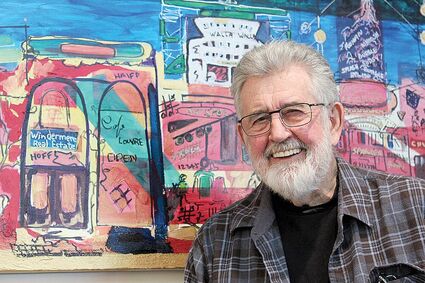 Doug Lofstrom's "Edmonds ... It's Our Town" has a prominent place on the second floor of the Edmonds Waterfront Center.

It's never too late to start something new, and 83-year-old Doug Lofstrom is exhibit one. Long taken by the thought of painting – but never putting inner thought to canvas for 75 years or so – he somehow has managed to become one of Edmonds' most prolific artists.

You could call it a hobby, but Lofstrom's painting rises above the quotidian, and buyers hand over good money for his bright-sized work.

And visitors to the soon-to-open Edmonds Waterfront Center will take in one of his grandest works: "Edmonds ... It's Our Town," a 10-foot-wide acrylic-on-canvas tryptic with a 48-by-72-inch middle piece and two accompanying side pieces.

Lofstrom completed the piece in 2017, soon after he started painting in his home and outside, in good weather, in front of Windermere's office on Fifth Avenue South. He gave it to the Waterfront Center, but hopes a donor will purchase it from him and donate it to the museum.

You might say the "Edmonds ... It's Our Town" is busy, and Lofstrom would agree.

"It's extremely busy," he said the other day as he stood before his work and attempted to explain it all. If that were possible.

There's certainly a lot to look at, and repeat viewings will no doubt bring new discoveries. There's an abundance of blues, of reds, of yellows. Mount Baker is in view, as is Mount Rainier, no matter that their geographical proximity is not exactly spot on.

The Sound is there. The Olympics. The peninsula. The Walla Walla ferry. The fountain.

Edmonds businesses are grouped on a horizontal plane with, again, verisimilitude be damned. ChurchKey Pub sits on the far right, the Waterfront Center holding down the left. This freewheeling expression is overlaid with names of business owners, of phrases Loftstrom's fond of.

Among those locals are Brooke (Baker) from Chanterelle. Haifa (Alhussieni ) from Cafe Louvre. (Greg) Hoff from Windermere. And Shubert Ho from Salt & Iron, among others. James Spangler, formerly of Spangler's Book Exchange, is listed twice. And Tracy Felix from ARTspot, who Lofstrom said was an early supporter who provided needed encouragement, is there too.

#(Editor's note: Freewheeling? Yes. I asked him where the Edmonds Beacon was, and Lofstrom promptly picked up a pen and scratched it in.)#

Crowding into the scenery are textured Picasso-esque shapes, blobs, letters, and other randos you'd have to look at closely to identify.

"All this stuff is action and color," Lofstrom said, sweeping an arm over the three panels. "It pops. And it makes me go 'wow.' I'll find people just standing and staring at it. Oh, what is it? Oh, right, it's the fountain. I'm very energetic, and I wanted it to show the energy of the city in it."

"Lilly Hendershot (of the Branding Iron), upon seeing the Edmonds piece, said it would become my signature work," Lofstrom said. "Me? A signature work? I was new to painting."

A serendipitous trip to Italy

The artistic bug began nibbling on Lofstrom during a glorious four-month trip to Europe with his wife, Carol Kinney, which included a month in Italy.

"We just loved Italy," he said. "We purchased a painting there from an artist named Massimo Cruciani, an acrylic on glass.

"We had it shipped to us. When we got home, it was like, Oh, my God, it was just gorgeous. I loved the colors. And I thought, maybe I should try to paint because I had painted once in 1969, just for fun. I did just one painting."

He told Carol he'd like to teach himself to paint. She said he could barely draw his own name.

Undeterred by the good-natured ribbing, Lofstrom laid out a plan.

"I would paint – get a load of this – I would paint 25 paintings, and then I would sell only one. So I'd always have an inventory of 25. That was the deal. Carol said, 'Oh my God, you'll never sell one. Why are you doing this?'"

A fast worker, Lofstrom had 25 paintings by the end of 2016. The first one sold to a buddy, a fellow real estate agent searching for a present for his wife. He asked for a price. Lofstom, perhaps overstating its value, put forth $1,300. Not so fast. The buddy offered $650. Sold.

Not bad for the first of Lofstrom's future oeuvre.

"It was so fun," the budding new painter, then in his late 70s, recalled. "And then another guy showed up about a week later and bought one for $1,000. And I thought, OK, this is good, because I've now paid for my materials."

"Doug, you can't do that," Lofstrom said Cole told him. "You're untrained. I have a whole bunch of painters who are great artists who work to hang their paintings here. You cannot be charging those prices." 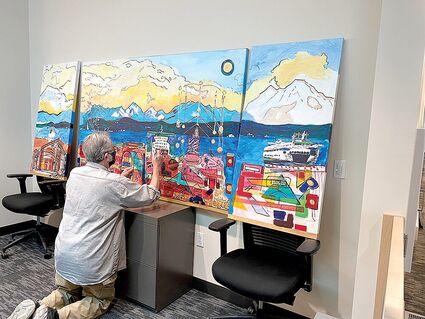 Doug Lofstrom works on the details of his painting late in the process.

So Lofstrom took his art – and himself – to the street, where he sold several paintings to passers-by. One painting – crafted in front of Engel's Pub – pictured a cityscape he painted from his memory of Italy. It was 6 feet long and 4 feet high.

Capitalism and street bartering in action. No agent fees. "Oh my God," Lofstrom said. "This was all so phenomenal."

Why not paint what you see in Edmonds?

The result is on the second floor of the Waterfront Center.

Doug's energy and enthusiasm are contagious. I love that he paints big canvases and is so fearless. I was thrilled to see his paintings at the new Waterfront Center.

Great work. I like what I've seen so far. Congratulations on your recognition. I'm coming to look. Enjoy.