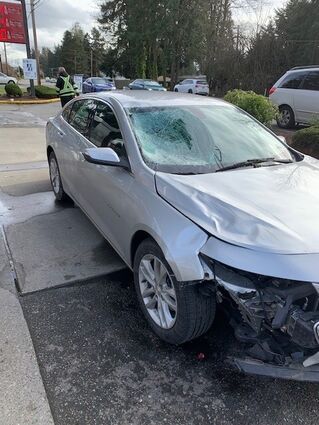 Detectives are seeking information on a fatal hit-and-run collision. Pictured is the suspected car.

The Chevrolet Malibu had substantial damage to the right front and right side of the windshield.

Gajdos said he was on his way to work when he believed he struck a garbage can. He continued to work without stopping. After completing his shift at work, Gajdos drove home and, while en route to his home in Bothell, he stopped at a gas station. Unknown to him, WSP troopers were at the gas station reviewing surveillance video footage.

The trooper at the gas station knew about a vehicle with substantial damage and detained and questioned Gajdos. Gajdos was later booked into the Snohomish County Jail for two counts of felony hit and run.

Anyone who may have seen the vehicle driving in the area, or of the pedestrians in the area, can contact Oliphant at 425--923-6244 or [email protected]