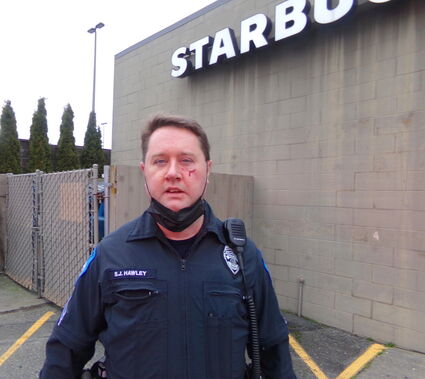 Edmonds Police Sgt. Shane Hawley after he was assaulted.

Edmonds Police say a 23-year-old man from Mountlake Terrace unleashed an unprovoked and violent attack on a Swedish Hospital employee early Saturday morning, Feb. 6, before fleeing the hospital and running naked through the streets of Edmonds.

The suspect also assaulted three more people, including a 71-year-old woman, before finally being subdued and taken into custody.

According to Sgt. Josh McClure, it all began at about 9:45 a.m. when officers responded to an assault at the hospital on 76th Avenue West. The suspect had punched a medical technician three times in the head and face as sh...