Snubbed by the city, artist finds welcoming spot in heart of downtown 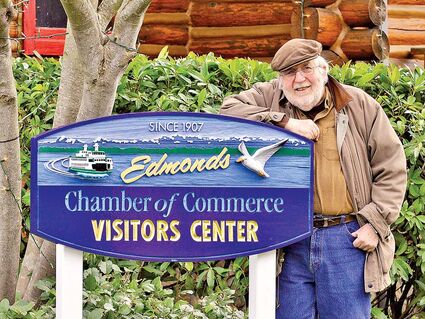 Edmonds artist Mack Benek and his sign: "It's gratifying. It's leaving my mark in Edmonds."

When the city of Edmonds announced in July 2018 that it would replace the beloved but well-worn 40-year-old "Welcome to Downtown Edmonds" sign leading into town, citizens overwhelmingly pushed city leaders to replace it with one that would project the same warm feeling.

A sign created by celebrated Edmonds artist Mack Benek was considered – and received more than 600 votes in a poll. But in the end, the city chose one from Clayton Moss of Pro Forma Design – the original consultant – that combined the familiar with the new, one the city said approximated the "wayfinding" signs scattered around town.

Benek's design, however, which did not look like anything around town but instead took its inspiration from the existing sign, is now planted in front of the Log Cabin Visitors center on Fifth Avenue North near the Edmonds Historical Museum.

So what about the new sign for Edmonds Way leading into Fifth Avenue South?

You can drive by and see for yourself.

"The COVID pandemic has really impacted our parks maintenance division, and they are the source for installing that sign," said Parks Director Angie Feser this week. "We have not set a date for the gateway sign installation as we are still establishing our parks small capitals work plan for the year."

Funding for design and fabrication for the gateway sign was approved in 2016 and included in the city's 2018 budget.

Benek is pleased with the placement of his sign in the heart of downtown. And it's perfect for selfies.

"It's gratifying. It's leaving my mark in Edmonds," Benek said with a chuckle.

Michael McMurray, who is developing Main Street Commons in Edmonds, provided financial support, while Valley Sign in Orting handled blasting, and Mike Holmberg in Mountlake Terrace carved the figures and inside lettering.

In addition to the design, Benek painted the sign and did the gold-leaf lettering. "It was really a team effort," he said.

McMurray was the community voice for Benek's rejected sign, making his opinion known through open houses and advertisements in the Beacon. So when he discovered the Chamber of Commerce was chucking its old "It's an Edmonds Kind of Day" sign in front of the visitors center, he stepped in with an idea.

"It was slated to be replaced with just a plain brown Edmonds metal sign," McMurray said. "So last year, I presented the volunteers of our chamber with a replica of Mack's sign as an option; they all approved the design and seemed to love it."

The new design incorporates elements of Benek's original design, but of course this time is specific to the Edmonds Chamber of Commerce.

"It still has the same elements," Benek said. "It has the ferry and a seagull, so it still speaks to Edmonds for me."

The sign is made from cedar, which Benek says pays homage to Edmonds' history as a shingle mill town.

"I feel being the first creative district in Washington state is about celebrating the people in town that are the most creative and artistic among us," said McMurray. "So what better way to support many of our amazing artists in our community than providing them opportunities like this? Mack has been an artist for more than 50 years and an Edmonds artist for 40 of those years. It's a really special honor for him and his family. I hope Mack's sign puts a smile on your faces, as it does mine."

Of course, Chamber President and CEO Greg Urban is happy with Benek's sign.

"I'm happy to have a new one," he said. "The plan was for Parks and Recreation to replace the old one with a new brown metal one, which was not ideal. So I'm glad to have this handcrafted, artistic one."