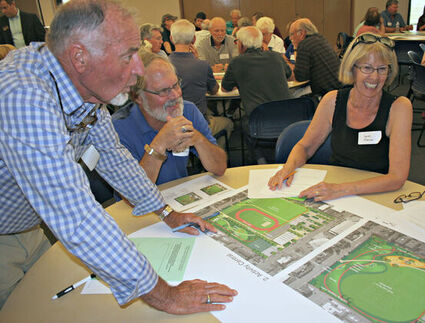 From 2016: Discussing plans for Civic Field at an open house are Dick Van Hollebeke, left, and Jerry and Lynda Fireman.

When Dick Van Hollebeke strode in to shake your hand, you could be sure of two things: He'd have a wide smile on his face and he'd be boosting whatever cause he was supporting.

When Mayor Mike Nelson announced Van Hollebeke's death at age 81 at Tuesday's City Council meeting, there was an audible gasp from several councilmembers, who were quick to praise Van Hollebeke's energy and his dual boosterism and activism.

"Dick and I ran against each other when I first was elected to the City Council," sai...