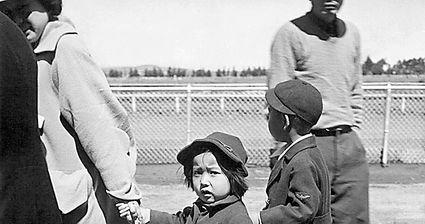 "Let It Not Happen Again: Lessons of the Japanese American Exclusion" is Dec. 7.

Here are a few upcoming events from Humanities Washington. All are free and online.

Ceasar Hart has been organizing drag shows in the small coastal towns of Aberdeen and Hoquiam for over six years. Join in conversation with Hart, and parents of transgender children from across rural Washington, as they share stories of parenting transgender youth during these times and how people can come together to tell a more inclusive story about gender identity in small town PNW.

In commemoration of the 100th anniversary of women's suffrage, remember some of the remarkable, but often unsung, women of the Pacific Northwest.

Drawing on her own experience as an activist and writer, the Seattle resident explores how these women inspired others and changed our state and our society.

@"Let It Not Happen Again: Lessons of the Japanese American Exclusion"@

Clarence Moriwaki shares the story of Bainbridge Island – the origin point of the Japanese American exclusion – to provide a human, historical account of this national tragedy, and to ask the question: Are there parallels to what's happening in America now?

Moriwaki uses historical images, including historical and current propaganda, to explore the fear, racism, and failure of political leadership that led to these unconstitutional actions during World War II, and why we must not let it happen again.

Local broadcaster and historian Feliks Banel explores our region's darkest weather days and most infamous storms. With archival photos, radio, and TV clips, Banel takes us back in time to hear stories of those who survived some of the worst Pacific Northwest weather in recorded history.

Further, Banel explores how these storms can revive our shared humanity. Frightening weather can bind communities together to share resources, commiserate, and protect each other. Participants are encouraged to share their own memories of how they survive being snowed in, washed out, or left without power in the wake of a big storm-and why we remember those moments for the rest of our lives.

Banel, who lives in Seattle, is a writer and producer, and serves as editor of Columbia, the quarterly magazine of the Washington State Historical Society.

"Set in Stone: What Should We Do With Controversial Monuments?"

Washington State has a park named after Jefferson Davis and an elementary school named after Robert E. Lee. Until this summer, a monument to Confederate soldiers sat in Lakeview Cemetery. Though far away from the Civil War, our state contains numerous commemorations to a war fought to preserve the grotesque institution of slavery.

What purpose do these memorials now serve? Do these statues remind us of what should never happen again, or do they glorify injustice and racism? Would removing them help with healing, or encourage forgetting?

"You look good for your age." "You're too young to understand."

In employment decisions, family discussions, medical care, and even in birthday cards, assumptions about being "over the hill" or "a lazy kid" are common. What do you wish society would stop saying about your generation? How can we talk about age and aging in a more positive, affirming way? In this interactive and fun talk, Seattle resident Dori Gillam welcomes individuals from every generation to explore how we can begin valuing all ages-including our own.

"Heating Up: The Ethics of Climate Change"

What if we could tell ourselves a new story about climate change – and, in doing, so, alter our relationship to our planet?

With larger, longer wildfire seasons, accelerating species extinction, ocean acidification, and sea-level rise, it's increasingly clear that climate change isn't something that's about to happening – it's here. But while the laundry list of problems wrought by climate change is well known, few talk about how our moral beliefs about nature have led us to the brink.

In this presentation, ethicist Brian G. Henning discusses how global warming itself is not the only problem – it's a symptom of a larger issue concerning how we conceive of ourselves and our relationship to the natural world.

Spokane resident Brian G. Henning is a professor of Philosophy and Environmental Studies at Gonzaga University.