Hundreds line up for COVID testing in Edmonds 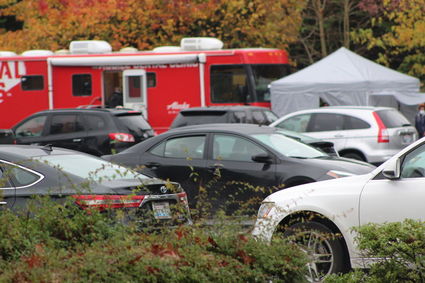 Michelle Grigsby took the test for her grandma.

Grigsby was first in line Monday, Nov. 23, for the free COVID testing offered by Verdant Health Commission and Medical Teams International, in partnership with the city of Edmonds.

"I'm her power of attorney," said Grigsby, manager of the Sound View apartments on Sixth Avenue North in Edmonds. "I need to make sure I haven't been exposed to anybody going out, going shopping, so I can do the things I need to do for her."

Grigsby had plenty of company, as cars filled the Edmonds-Woodway High School parking lot and spilled out onto 76th Avenue West. The line then worked its way west on 212th Street SW toward Five Corners.

Edmonds police officers directed traffic in the lot. Shannon Burley, deputy director of the Edmonds Parks Department, was also on hand to help with traffic.

Testing began at 10 a.m. An hour earlier, half the parking lot was full.

"It goes pretty quickly," she said. "So once we get the medical part set up and the cars moving, we anticipate a full day of testing. No one will be turned away. If you don't have a vehicle, you won't be turned away."

Burley herself said she would be getting tested as well.

"It seems like the right thing to do," she said.

"It'll be nonstop for seven hours," said Burley. "We will be working to figure out to have more volunteers at future events."

Last week, Edmonds Mayor Mike Nelson said the goal is to test as many people in the community as possible.

"You may not be showing symptoms," he said, "but could still spread the virus. Getting tested protects your loved ones."

Medical Teams International staff – dressed in full PPE gear – registered each person as they drove up. Clients did not touch the registration paper for infection control purposes.

They requested those getting tested show ID and insurance cards, as insurance payments help offset the cost for those who can't pay.

Tests were sent to the University of Washington, and results can be accessed online with a code provided during testing. Results will be available two to five days after the test, but they may also be available in as soon as 24-48 hours.

The testing method used is anterior nasal swabbing, resulting in less discomfort than other methods. Just a portion of the swab is inserted into one nostril at a time and rotated for about 10 seconds. The test is safe for both children and adults. 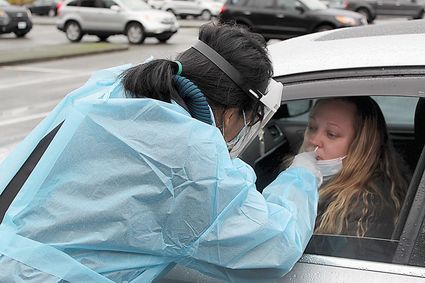 Michelle Grigsby of Edmonds was first in line for a COVID-19 test.

It was last week that Gov. Jay Inslee ordered new statewide restrictions, to continue through Dec. 14. Inslee cited the high number of confirmed, positive COVID-19 tests in Snohomish County and the state, spiking higher recently than in any time since the pandemic began in March.

The new restrictions come as Washington sees consistent, increasing, daily case counts, with over 2,000 cases a day and average cases in the state doubling over the past several weeks. (For more information, see http://www.bit.ly/33bLLj5.)

Activities not included in the modified restrictions should follow current guidance. All K-12/higher education, child care, and courts and court-related proceedings are exempt from the new restrictions.

According to the Snohomish Health Districts, as of Nov. 19, 263 county residents have lost their lives because of this virus. This is nearly 25 times the number of influenza-related deaths, 11, and more than twice as many opioid overdose deaths, 113, in 2019.