A 1953 fire department tragedy on a summer night 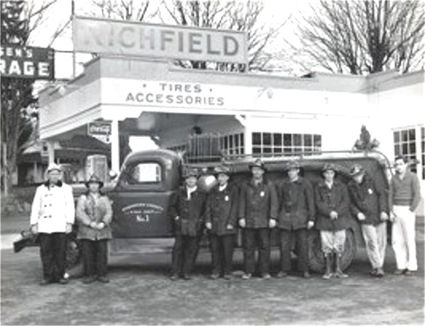 Volunteer fire fighters from Station No. 1, Snohomish County Fire Protection District No. 1, stand beside one of the district's fire trucks in front of Eisen's Garage on the northeast corner of today's 2l2th Street SW and Highway 99. The two men on the left appear to be District Fire Chief Clarence Crary (in the light-colored jacket) with Assistant Fire Chief Carl Eisen, next to him.

It was a routine call for Fire Station No. 1 late Sunday evening, July 26, 1953 – a brush fire was burning at Talbot Park near Meadowdale.

Piling onto the department's 1951 Kenworth firetruck, with Mahoney driving, the seven men headed for Talbot Park.

Pulling away from their Seattle Heights station, the firetruck headed west across Highway 99 and as it raced past Middleton's Grocery Store at the northw...