Applicant: It will be used mostly by ferry walk-ons 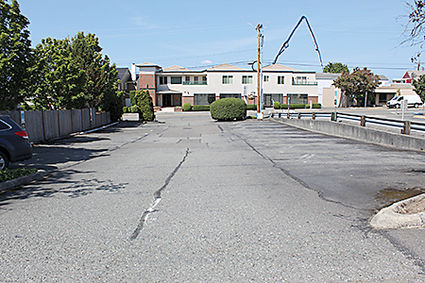 Want to park here? You'll soon have to pay during certain hours.

After a considerable delay, Edmonds Hearing Examiner Phil Obrects has approved a conditional use permit that will allow for the city's first paid parking lot downtown.

The Nov. 16 decision allows Hui Main Street LLC in Seattle (Beacon Hill) to charge for parking after Diamond Parking Services applied for the permit on behalf of the owner. Two people own the land where the paid parking will be. Zewhen Hu did not return phone calls, and the email he supplied to the city came back as undeliverable. The other owner is Bob Lee of DKL 88 LLC of Renton. He also could not be reached.

The paid parking will be in three existing parking lots behind Bank of America at 306 Main St. and extending just south of Main on Fourth Avenue South.

The parking lots are privately owned and have been managed for private and public use for many years. Two of the parking lots have been used for the Bank of America and a third has been used to provide three-hour parking. The two lots used by the Bank of America will continue to be used for bank parking during bank business hours and will be used for paid parking during off-hours.

The third area will be commercial parking 24/7. There will be no change to access or the parking lots themselves, just the establishment of paid parking on portions of the lots.

The city of Edmonds had recommended that Obrects approve the Diamond Parking Services conditional subject to the following conditions:

– A building permit is required for improvements to the site including, but not limited to, signage, kiosk installation, restriping, and updating landscaping; and

Deina Copaceanu of Diamond Parking Services, who did not return phone calls, wrote in an application that the paid lots will be used mostly by walk-on Edmonds-Kingston ferry customers who leave their vehicles overnight.

According to Diamond Parking's application, the principal duty of the parking operator will be to collect, process, and keep accurate records for parking fees on behalf of the owner. There will be no personnel on site.

"The proposed use and its location for the property is consistent with the purposes of the city Of Edmonds zoning ordinance and will not be detrimental to the public health safety and welfare," Copaceanu wrote.

The sites are zoned downtown business (BD1 and BD2). The parking lots are privately owned and have been managed for private and public use for many years, the city said.

Diamond Parking will operate the parking facility 24 hours a day, 7 days a week, as an independent contractor.

Edmonds City Planner Michael Clugston said the only current pay-for-parking in Edmonds is located in the lot near Top Pot by the ferry.

In a report detailing his findings, Obrects wrote that, "The applicant has unwittingly found itself involved in an ongoing hearing notice issue raised by a third party that has led to unfortunate delays due to the need to reopen the hearing twice to address potential and actual defects in public hearing notice."

That third party was Edmonds resident Finis Tupper, who argued that there was not enough notice of the proposed paid parking to residents within 300 feet of the lot, as well as to the community at large in the form of notices.

Tupper had obtained the address through the Snohomish County Assessor's Office taxpayer rolls.

In their responses to Obrects' inquiries about mailed notice methodology, city staff said they were unaware that the county was using taxpayer addresses instead of owner addresses. Because of this, the city says it will generate owner addresses using city resources instead of having the Assessor's Office generate its lists.

The taxpayer addresses generated by the Assessor's Office are not necessarily the physical addresses of the subject property, Obrects wrote in his report. They are self-selected addresses submitted by property owners to the county so that tax statements and the like are sent to a location where the property owner is more likely to receive them.

Tupper also claimed the city didn't publish enough community notices (notices are normally placed in the library and City Hall, but both have been closed due to the coronavirus.)

The city did publish a required legal notice, but – like all of its notices – was placed in The Herald newspaper out of town in Everett. There was a notice at the site, as well. In addition, city legal notices are also published online, but those interested have to know where to look for them.

"The circumstances leading to these re-opened hearings were highly unique, resulting from a combination of COVID, some ambiguous notice requirements, and a litigant actively trying to force procedural error from the city," Obrects wrote, noting that he had never had to reopen a hearing twice in more than 2,000 cases.

"Ultimately, it is highly debatable whether staff made any error in hearing notice, but if such an error did occur it was limited to not posting hearing notice in City Hall and the library while those two buildings were closed during COVID."

But Tupper was successful in getting more notices published.

"The hearing was reopened," Obrects wrote, "with posting of all required buildings to correct this potential deficiency."