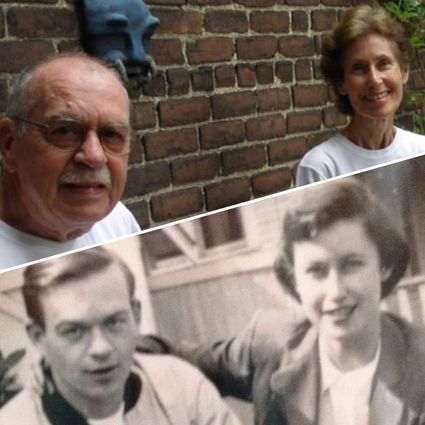 A devout Catholic, Mom paid for her Catholic High School tuition by working at the Multnomah Library in Portland. While Dad, Robert (Bob) Crow was serving in WWII, his family moved next door to her family in Portland, so she literally married the boy next door in 1950. They moved to Eugene, for Dad to finish college.

A short year in Seattle was followed by their move to Yakima in 1952, where they raised their five children. Mom and Dad moved to Edmonds in 1983 and were members of the Holy Rosary parish. Mom enjoyed music, reading, gardening, traveling to Canada, NY and San Francisco, and spending time with family.

As avid walkers, Mom and Dad enjoyed the Art Walks in Edmonds, jazz festivals, and local theater. Mom was outgoing and friendly to her neighbors and anyone she met. She contracted Giant Cell Arteritis in 2009 and was blind the last eleven years of her life. Dad lovingly cared for Mom until his death in 2015. They were married for sixty-four years. Mom spent the last six years living close to her daughter Diana in Kirkland. We appreciate the tender care given to her at the adult family home.

She was also preceded in death by her parents; brother Denny Gillis of Eugene, Oregon, and our brother Larry. She is survived by sons David of San Francisco, Gregory of Yakima, and Jon of Brooklyn, NY; her daughter Diana Boyle and son-in law Kevin Boyle of Kirkland, WA; grandson Ryan Boyle of Edmonds; her brother Fred Gills and his wife Shirley of Tacoma, WA; and many nieces and nephews.

A Celebration of Life and burial was held at the Edmonds Memorial Cemetery on September 3.