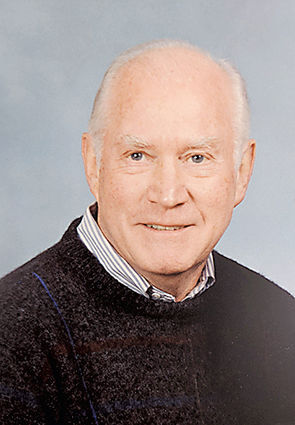 Bernard "Bernie" Dean Hoover is in the presence of the Lord, having died peacefully in Edmonds, WA, in August 2020, at age 92. He lived an industrious, adventurous, creative, productive life, full of love of family, travel, and faith, and was a longtime member of QA Lutheran Church. He exemplified the love of his Savior.

Bernie Hoover was born in Seattle, Washington, the 6th of 9 children of Roscoe and Mildred (Stevens) Hoover. He is predeceased by his siblings Faith Stevens, Geraldine Dressler, Galen Hoover, Del Hoover, Volney Hoover, and Shirley Ball.

In 1929, the Roscoe Hoover family moved from Seattle to Blaine. After working there as a Customs Inspector, father Roscoe died when Bernie was just 8. This resulted in a move to Puyallup, where Bernie lived until college.

Living through the Depression with 8 siblings, Bernie learned to be industrious, thrifty, and a jack-of-all trades. He was a capable vegetable farmer and berry picker at the homestead in Puyallup, and with his brothers, herded cows across the fields to the Puyallup fairgrounds for the livestock shows.

The Puyallup Fair was a moneymaker for the family – they sold parking spots in their garden, and rented out the kids' rooms to carneys, cowboys and sideshow acts. Other jobs he held starting in 7th grade were at the Western Washington Experiment Station, building airplane wings at Boeing, service station attendant, and fraternity houseboy.

At the University of Washington, he obtained a degree in pharmacy and met his cherished wife Joan, who became a librarian. After graduation, Bernie was drafted and sent to Germany, where he was joined by Joan and his firstborn daughter, and then by Joan's parents.

This was one of the most memorable times of his life, and began his fascination with travel and dreaming of and planning trips. Bernie and Joan made several van trips across Europe and the U.S., took over 20 cruises, and enjoyed both tours and independent travel.

Their last trip was a cruise to Alaska with family. If he had one more trip in him, his wish was to return to Switzerland, the beautiful land of his roots.

Bernie was a planner and went after what he wanted. That included Maughan/Queen Anne Pharmacy, which he had his eye on since pharmacy school and owned from 1962-1989, the beautiful view house at the end of Wheeler Street (2 houses from his first Queen Anne residence), and the 28-foot cabin cruiser he built himself in his back yard, after work. He even did much of the construction work on his cabin on Lake Tapps.

After moving to Edmonds in 1994, Bernie and Joan built a lovely home with a view of Puget Sound, islands, sunsets, and the Olympics. When ready to downsize, they moved to Cristwood, and eventually to Sunrise of Edmonds. The compassion and care from the Sunrise staff was exceptional, and they continue to care for Joan.