Say hello to the Trumps in Edmonds 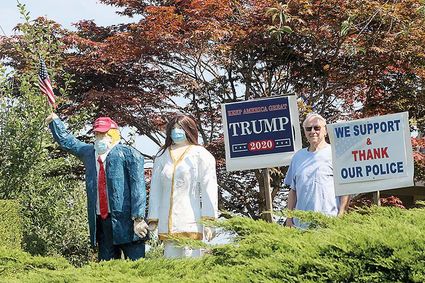 The longtime Edmonds resident who created life-size papier-mache, stick, and chicken wire figures of President Trump and wife Melania must have known he'd get flak for a story highlighting his creation seen by hundreds every day.

"My son said, Dad don't do it," said Thomas, who lives on the corner of Ninth Avenue South and Spruce Street and didn't want his last name used. He was fine with a photo, though. "My grandson didn't want it, too. They're worried."

But Thomas, a long-time Edmonds School District art teacher who is retired, said he felt compelled to create the figures – and a sign supporting police – to keep busy after the recent death of his wife, among other things.

"I think so much of Donald Trump that I just had to recognize it," he said. "My point is, I want people to talk about it. And I want the silent majority to be heard. I would hope other people would put stuff out. That's what I'm really after. I'm amazed – actually hundreds of people have taken pictures. All the time. And people come to the door and thank me."

Thomas said the figures – complete with face masks – are taken inside every night. Not because of vandalism fears (although eggs have been thrown at it), but because rain and wind might ruin them.

At first, Thomas had a "honk for Trump" sign near the figures, but he ditched that because neighbors said the constant noise interfered with their children's home studies.

Thomas said he's working on new figures of the Trumps.