Edmonds did have a July 4th parade

It was a little smaller, but no less patriotic 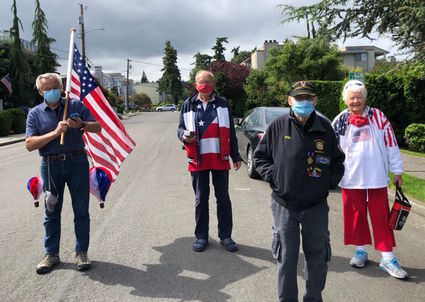 NInety-year-old Phil Sacks and a couple of his neighbors were not going to be denied the Edmonds 4th of July Parade.

Phil, a twice-wounded combat veteran, has always marched in the Edmonds 4th of July Parade. So this 4th they marched, carried the flag, and blared loud music from a portable Bose speaker.

They marched four blocks in Edmonds.

The folks out on the streets around 10:30 a.m. seemed delighted to watch.

Several stopped and saluted Phil as the small group marched past.

Phil, we salute you.