Say their names: Protesting racial injustice in Westgate: 'I had to do something' 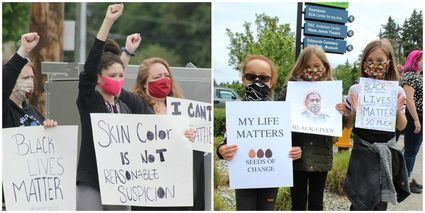 It's a far cry from the mass scenes of protests nationwide after the killing of George Floyd, a black man who died after a white policeman in Minneapolis pinned him under his knee for nine minutes.

But there have been scattered protests at the corner of Edmonds Way and 100th Avenue West in Edmonds' Westgate neighborhood. The site is the go-to location for citizen protests, who have turned up over the years for immigration and gun-control rights.

"I'm a white person, and I recognize I have privilege," said Edmonds resident Leah Hertl, who held up a "Black Lives Matter" sign at the intersection on Sunday, May 31.

Standing next to her was Linnea Ekstrom, her au pair, whose sign read "Say Their Names: George Floyd, Ahmaud Arbery, Breonna Taylor."

"I want to be clear that I'm so proud to be an American," said Hertl, "so I feel blessed living in this country. But I had to do something. I'm heartbroken."

Hertl said she's watched coverage of the nationwide protests on television and reports in the newspaper and social media.

Most passersby honked in support, but some flashed thumbs-down signs.

"It's not an us vs. them thing, right? It's not," Hertl said. "And I don't understand why some people think that it is."

Tana Axtelle helped organize the Westgate rallies, which have been held at noon all week at the busy intersection. She is a member of the Edmonds Neighborhood Action Coalition and the Citizens Housing Commission.

"I just had to do something," she said Tuesday on the southwest corner of 100th and Edmonds Way. "I mean, in my lifetime we haven't seen much change."

Although marches and, in some cases looting, occurred in Seattle and other Puget Sound cities, Edmonds police have reported no issues as of Wednesday, June 3.

It was a different case in neighboring Lynnwood.

On June 1, Lynnwood Mayor Nicola Smith imposed a curfew from 5 p.m. that day through 5 a.m. June 2. It continued on Tuesday, as well. It was enforced by the Lynnwood Police Department and other law enforcement agencies.

"Our Lynnwood Police Department took the proactive approach to ward off potential looting and rioting by closing off the Alderwood Mall property, closing roads entering the property, and actively patrolling other city businesses," Smith said.

"What we saw happen in the late afternoon and into the evening was over a hundred individuals entering our city and our retail center, roaming around in groups of 10-15, attempting to gain accessing into closed businesses."

"I write to you this evening with a broken and heavy heart," Edmonds School District Superintendent Kristine McDuffy aid on Monday. "I want to acknowledge the senseless killing of George Floyd by police officers in Minneapolis and the events that have since followed. It is undoubtedly weighing heavily on all of us and leaving many of us, including myself, without the words to express the deep and painful feelings we are experiencing.

"Specifically, to our Black students, families, and staff – I want you to know that we SEE you, we VALUE you, and we STAND WITH you.

"The district is committed to supporting students and families as we navigate the persistent racism and aggression against Black people. We will continue the work to seek to understand how these tragedies continue to happen and what can be done to prevent them from occurring in the future.

"We will continue to make efforts and collectively embrace hope through our equity policy, our Black Lives Matter resolution, and our commitment to student, staff, and family voice.

"We know many of you are overwhelmed right now. Please know you are not alone. Even as we must be physically distant from each other, please reach out to those who may need your support and compassion during this time."

"I stand against the horrors that were inflicted on George Floyd and many other African-Americans before him, and I stand in solidarity with those peacefully protesting acts of racism and violence," said Snohomish County Executive Dave Somers in a statement Tuesday.

"I also stand against the gratuitous violence and looting we are seeing in Seattle and other cities. We have to end the hate, or we will be consumed by it. As Martin Luther King, Jr. said: 'Hate begets hate; violence begets violence; toughness begets a greater toughness. We must meet the forces of hate with the power of love.'

"A long time ago, a priest told me to always ask myself if my thoughts and actions were life-giving or death-dealing. We all must ask this and choose light over darkness. It is the only way we can make progress and build lasting justice."

"I am working on immediate and urgent legislative solutions to the crisis of police violence and white supremacy," she said. "We must not only reform our systems but rebuild them. We cannot continue to allow and condone law enforcement to use the sacred trust we have given them to kill people.

"That is simply wrong, and we need to fix it here at home in Seattle and across the country to get real protections and accountability built into every single law enforcement department-no exceptions, full stop.

"My colleague, Congresswoman Ayanna Pressley, has a resolution to condemn police brutality, and I will do everything to help move it forward. The Senate should immediately pass the anti-lynching bill that we in the House passed to make lynching a federal crime.

"We also have to take on the lack of hope and the devaluing of black lives in jobs, health care, and the pandemic response. That's why I have helped introduce legislation that fights for equity in health care, education, housing, the economy, and the justice system. We need real solutions now."