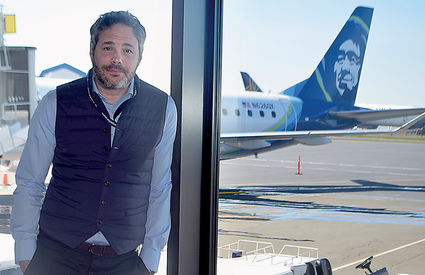 Propeller Airports CEO Brett Smith stands in front of an Alaska Airlines plane in the passenger terminal at Paine Field. Commercial flights out of Paine Field have been reduced from 24 to 5 as a result of the coronavirus pandemic.

In a span of just a few weeks, Propeller Airports CEO Brett Smith has experienced unimaginable highs and lows.

Propeller Airports, which designed, built and operates the passenger terminal at Paine Field, celebrated its 1 millionth traveler in late February right before its one-year anniversary of operation in the first week of March.

To the best of his knowledge, Smith said Paine Field is the only airport in the last 40 years that has started from scratch and served 1 million passengers in less than a year.

The airport received rave reviews from travelers, and also was named one of USA To...