Edmonds homicide: 'This is a really rare occurrence'

Suspect at large after clerk shot dead at 7-11 on Highway 99. 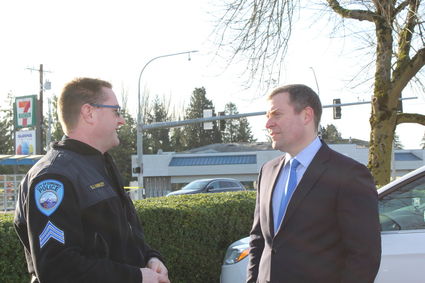 The Snohomish County Medical Examiner's Office has identified the victim of a homicide at the Edmonds 7-11 on HIghway 99 on Friday: 64-year-old Nagendiram Kandasamy of Edmonds.

Although the investigation is just beginning, Edmonds police say Friday morning's murder of a store clerk is something that just doesn't occur in Edmonds.

"I can't think of the last time this happened," said Sgt. Shane Hawley, a longtime Edmonds Police Department public information officer. His last day as a PIO is Monday, after which he will switch over to patrol.

"This is a really rare occurrence. Random stranger violence is pretty uncommon. Most of the time when we have any sort of homicide or serious assault, it's people who know each other or are related."

It was just after 5 a.m. on Feb. 21 that a customer entering 7-11 at 238th Street SW and Highway 99 called to report a store clerk lying on the floor, unresponsive and bleeding. The clerk, a 64-year-old Edmonds resident, was dead at the scene from an apparent gunshot wound.

"(The caller) was just out to get their morning coffee, and they came with upon a pretty horrific discovery," Hawley said.

The suspect, who fled on foot, is at large.

Police describe the suspect as a white male, possibly in his 20s, wearing black shoes, black pants, and a red-and-black jacket. The hood of the jacket was up and his face was covered when he entered the store, said Hawley, based on video surveillance recovered at the scene.

"You can see them coming in the store," Hawley said. "It looks like he has a gun in his hand. He's already got his hood up, and it looks like something's covering his face. So he was clearly there to rob the place or cause harm to the store clerk."

Hawley said it doesn't appear that the suspect took anything.

"He ends up firing a shot and leaving. So we're not 100 percent sure if we're going to call it a robbery at this point in time. We're still looking into that. We've got to figure out exactly what the motive is here."

Police units from Snohomish County, King County and the Washington State Patrol responded to the area as a K-9 track was conducted to try and locate a suspect.

"We're hoping the public can identify this person, or anybody that has information can at least point us in the right direction," Hawley said. "This is pretty brazen. We have a serious concern related to this suspect and his danger to the community. If you're going to go to rob a convenience store, everybody knows there's maybe 50 or 60 bucks in the till, so you have to be pretty desperate.

"And then you throw in the fact that now the homicide suspect is also on the run. We consider him a significant safety risk to the public, and anybody with information, please give us a call. You can send anonymous tips in, but if you see him, do not approach him." 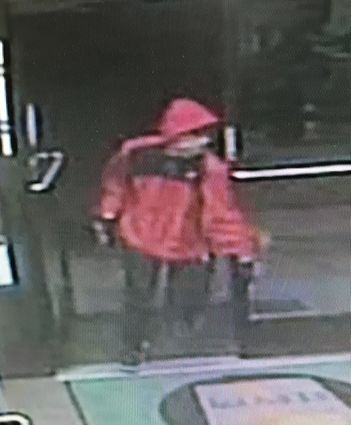 Edmonds police released this image of the suspect in the fatal shooting of a store clerk. It was taken from surveillance video.

Edmonds Mayor Mike Nelson, who was present at the scene when Hawley addressed media, thanked the Edmonds Police Department for its rapid response to the incident.

"This is a tragic loss of life in our city," he said. "Especially, my heart goes out to the family members of this Edmonds resident. I want to also thank the multiple agencies that responded, including the Lynnwood Police Department, the Mountlake Terrace Police Department, and Washington State Patrol, for their aid and assistance in trying to track down this suspect.

"Edmonds is still a safe city, and we're going to do everything we can to find who this is and bring him to justice."

If anyone sees the suspect, do not approach and call 911 immediately. Anyone with information about this incident should contact the Edmonds Police Department at 425-771-0200.

A phone tip line is available by calling 425-771-0212. Online tips can be submitted at edmondswa.gov/police/anonymous-tip.html.