Edmonds-Woodway dominated the field at the 3A Kingco-Wesco South Sub-Regional wrestling tournament.

The Warriors won seven individual titles, had four second-place finishes and are sending 15 on to this week's regional tournament.

The Mavericks came away with two titles, three second-place finishes, and are moving nine on to regionals.

"He has taken second three years in a row and he got a district title tonight," Alfi said. "We're really excited for Ousman."

Another highlight was sophomore Alex Rapelje defeating Meadowdale's Jin Lee, who took sixth at 126 at last year's state meet, 12-2 in the 138 finals. Rapelje recorded two technical falls and a pin en route to the finals.

"I could have executed my moves better in the finals," Kreuger said. "But sometimes that stuff happens. I'm glad I came out with the win."

Krueger has only one loss to a Washington opponent, No. 1 ranked Jahvius Leui of Chief Sealth. Krueger, who finished sixth in last year's 3A heavyweight division, lost two matches at the Tri-State tournament in Idaho. Leui finished seventh in the 4A heavyweight class last season.

Meadowdale sophomore Saul Hernandez captured the 170 title by injury default when Shorecrest's Ian Mortenson was unable to continue in the tournament. Hernandez recorded two pins in his earlier matches.

"I'm pretty happy with how we wrestled," Knowles said.

After a loss in the quarterfinals, Meadowdale senior Caleb Monillas rebounded with four victories to take third at 160.

"He was probably in one of the tougher and deeper weight classes," Knowles said. "So that was pretty exciting."

Meadowdale's Hilmy Burch took second at 106. He will be joined at regionals by Javier Richmond (fifth at 113), Devin DeWeese (third at 145), Thaddeus Gonzalez (fourth at 152) and Thomas Nakamura (fifth at 170). The top five placers advance to regionals. 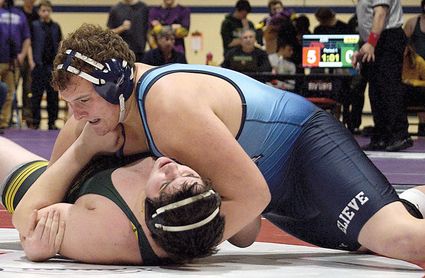 In the girls sub-regional tournament, Edmonds-Woodway senior Vatoria Keyes won by injury default over Everett's Julia Blair at 235. Keyes, who finished fourth at state last year, recorded a pin and technical fall in the tourney. Also moving on are Edmonds-Woodway's Destinee Harris (third at 155) and River Freeburg (fifth at 125). Meadowdale's Farrah Padilla placed fourth at 135.

Alfi is impressed by the progress the Warriors have made this season. Edmonds-Woodway scheduled a number of tough tournaments during the regular season with an eye toward the postseason.

"What we did is we found the best competition for our kids," Alfi said. "We pushed them. We tested them. They had to come back and they had to figure out things to work on. ... They've done a good job tuning their craft and fixing some holes in their game."