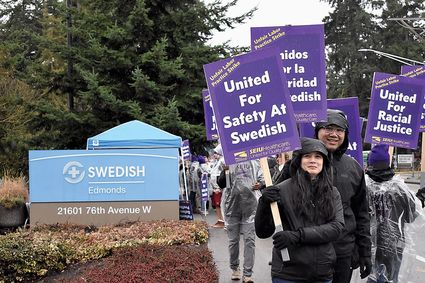 Nurses and technical and service caregivers at Swedish of Edmonds walk a picket line Wednesday morning, Jan. 29, after going on strike the day before. The caregivers of SEIU Healthcare 1199NW at Swedish Medical Center plan to continue to strike and picket through Jan. 31. They are protesting what they say are unfair labor practices and patient safety issues caused by company management. The strike involves nearly 8,000 employees, including those at Swedish Edmonds on 76th Avenue West.

More than a dozen nurses and caregivers who are on strike at Swedish Medical Center campuses in Puget Sound, including Swedish Edmonds, told the Edmonds City Council on Tuesday that they were fed up and forced to take action.

The three-day strike involves nearly 8,000 employees who are members of Service Employees International Union Healthcare local 1199NW. They went on strike after 10 months of talks with management of Swedish-Providence broke down. (See full story at edmondsbeacon.com.)

At Tuesday's council meeting, speakers said the main issue was not pay, but rather, patient safety an...