Fireworks show returns to the water 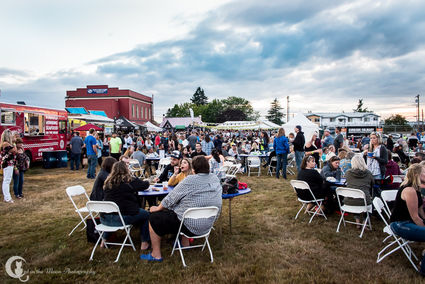 Diana Scheel/Cat in the Moon Photography

Taste-goers in the beer and wine garden at last year's Taste Edmonds.

The Edmonds Chamber of Commerce, which sponsors and funds the annual Taste Edmonds, announced Thursday that 2020's event will be held at the Frances Anderson Center, 700 Main St., Edmonds.

The move is necessary as the City of Edmonds is scheduled to begin work this spring on the construction of the new Civic Park, whose downtown location has hosted the Taste for many years. Once the park is finished, the Taste plans to move back.

"We are distilling the Taste down," Chamber Communications and Program manager Alicia Moreno said during the chamber's annual report to members at the Edmonds Yacht Club.

That means only one stage for music and other entertainment – where in past years there have been as many as three – and 12 food trucks.

According to chamber CEO and President Greg Urban, three-quarters of the bands coming to the Taste have been booked.

Taste Edmonds is Friday through Sunday, Aug. 14-16. The Frances Anderson Center is also home to June's annual Edmonds Arts Show and was the site for last year's inaugural Edmonds Oktoberfest.

Urban also announced the July 4 fireworks show, also held at Civic Park, will move to a barge over the water this summer, with a possible viewing area along the Sunset Avenue bluff.

Look for more information in the Jan. 30 Edmonds Beacon.