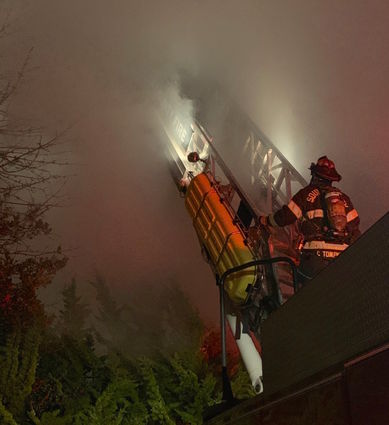 Fire at home in 6900 block of Fisher Road in unincorporated Edmonds.

A two-alarm fire ravaged a home Wednesday, Dec. 25, in the 6900 block of Fisher Road in unincorporated Edmonds, just north of the city line.

The house was already engulfed in flames when the first firefighters arrived. Access was difficult – up a narrow, steep driveway. Due to difficult access and the size of the structure, firefighters called for a second alarm.

At the peak of the fire, more than 50 firefighters were on scene. Crews were assigned to protect two neighboring ho...