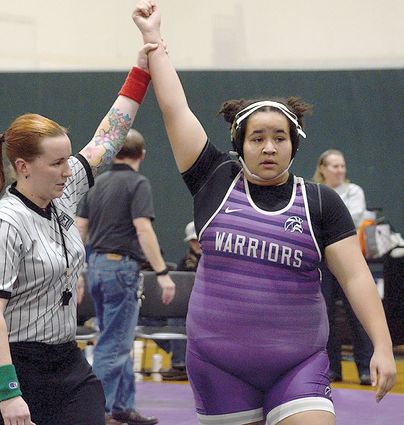 Vatoria Keyes has put in the work.

The Edmonds-Woodway senior made history at Mat Classic XXXI when she became the school's first female wrestler to capture a medal at the state championships with her fourth-place finish in the 235-pound division.

Ever since stepping off the podium, Keyes has been on a mission to do all she can to prepare to take the next step – to become her school's first female state champion.

"Definitely my end goal is to win state this year," Keyes said. "I put in a lot of work over the offseason and I'm just feeling really good about this year. I'm more confident and my technique is definitely in tip-top shape."

Keyes spent much of the offseason attending camps and working on her conditioning.

"I did a lot more wrestling than I usually do," she said. "I did a lot of weightlifting and a lot of running, so that I can get my cardio up. I just feel stronger."

Opponents should expect a more active Keyes. In previous seasons, many of her matches extended into the third round. Keyes hopes to pin more of her rivals this year.

"I've worked on being more aggressive," she said.

"Her movement is much better when she's on the mat," Ray said. "From the get-go, as soon as she starts, she's moving her opponent, setting her opponent up pretty well."

Keyes' aggressiveness is paying off.

At the Everett Lady Classic, Keyes recorded back-to-back pins en route to the tournament title. She barely broke a sweat in dispatching Lakewood's Elizabeth Aleo in 33 seconds during a quarterfinal match Saturday, Dec. 14, at Everett High School. Keyes then pinned Cascade's Joyce Takali in 1:49 to advance to the finals and won by injury default over Arlington's Alyson Ellingson in the finals. Keyes also recorded a pin against Snohomish Tuesday, Dec. 10, at Edmonds-Woodway High School.

"She's been in complete control in her matches," Ray said. "She's been outstanding."

Keyes also has worked on her mental approach to the sport. It all started during the summer when Keyes went through a goal-setting process.

"Every single day since last year at state, I've been writing on my mirrors and on sticky pads 'You are going to be state champion. February 2020. Weight class 235,' Keyes said. "I've been drilling it in my mind. I've been drilling into my mind that I'm a great wrestler. That's been tough for me to come to the realization that I am a good wrestler."

Mental toughness is going to be important for Keyes, who said that she sometimes got down on herself when she lost a match last season. Keyes has learned to let the losses go.

"This year I'm definitely going to be facing my own barriers and just pushing past them," she said. "If I lose, I'm going to get back up. No matter what happens during the season, I'm just going to grind it out no matter how the season goes until state."

Keyes will be aiming for her fourth straight trip to the state tournament and the Tacoma Dome. She went 0-2 during her freshman year and 1-2 as a sophomore. As a junior, Keyes won her first match and then lost in the second round. She rebounded with four straight victories in the consolation bracket before losing in the third/fourth place match.

Ray said that Keyes was just a move or two away from potentially advancing to the finals.

Edmonds-Woodway continues to be one of the larger teams in the area in terms of numbers, with a roster of 18. Keyes is proud of how the team has developed through the years.

The friendships with her teammates mean everything to Keyes.

"All my closest friends on all on the team," she said.

When she graduates next spring, Keyes is glad to know the program will continue to thrive.

"It's just a great feeling to be able to watch the team grow and to be able to help them and know that when I leave, they're still going to be there."