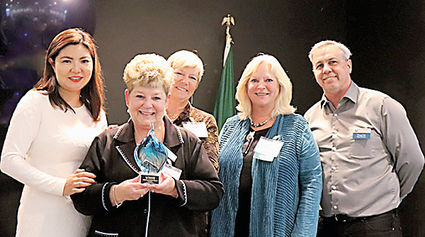 Clay recently retired from her many volunteer roles at the college.

The award recognizes long-serving supporters of Edmonds CC and the college foundation as giving truly significant and meaningful support through their financial or volunteer efforts.

"For over two decades, Diana Clay has dedicated herself to transforming lives through her work with the Edmonds Community College Foundation," said Douglas Fair, foundation board member and Snohomish County District Court judge.

"As chair of critical committees such as finance and special events, she provided steady guidance that allowed the foundation to flourish.

"With her help the annual income of the foundation has quadrupled over the years. Like a solidly placed cornerstone, she has been an unseen and invaluable asset to the college and the community.

"While her leadership will be missed, her impact will live on through the students, families, faculty, and staff that have attended or worked at the college. Her commitment to the college and the foundation has enriched and transformed thousands of lives."

Clay joined the foundation's board of directors in 1997 and served as treasurer from 1999 to 2017. She served on numerous committees during her tenure, most notably on the Development Committee; chair of the Finance Committee; and chair and co-chair of the Gala Committee for 15 years.

She was appointed by the Washington state governor's office as an Edmonds CC Trustee in 2011 and served for eight years.

"I am delighted that Diana has been chosen to receive the Cornerstone Award," said Edmonds CC Trustee Emily Yim. "She has brought so much to the table in her eight years on the Edmonds CC Board of Trustees in terms of good governance and also passion for student success. She understands at a very deep level how foundational education is in changing people's lives, which makes this recognition so meaningful."

Clay is co-owner and a managing member of Clay Enterprises, a family business involved in real estate development, investments, and management and leasing, primarily in the south Snohomish County area.

Clay began working in her family business in 1974; the same year she took classes at Edmonds CC. She also helped form and open Prime Pacific Bank. Clay has a passion and talent for cooking and taught cooking classes at Sweet Basil's School of Cooking in Edmonds.

Since 1955, Clay has lived in the Lynnwood area. She and husband Michael Kerr have two adult children and four grandchildren.