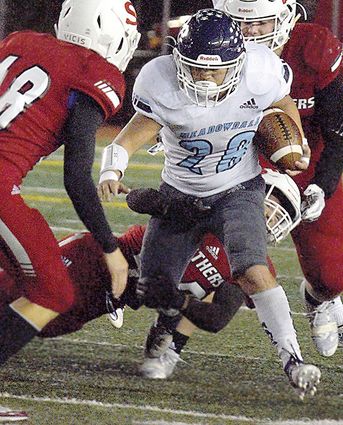 Meadowdale's Caleb Monillas runs against Snohomish during a Wesco 3A South game Friday, Oct. 25, at Veterans Memorial Stadium in Snohomish.

Meadowdale lost the battle on both sides of the line against Snohomish.

The Panthers scored four unanswered touchdowns and recorded a safety in the first half to cruise to a 58-14 victory over the Mavericks in a Wesco 3A South football game Friday, Oct. 25, at Veterans Memorial Stadium in Snohomish.

The loss means that Meadowdale (4-2 in the league, 5-3 overall) ended up as the league's No. 3 seed and will face Wesco North No. 3 seed Arlington in a crossover/seeding game at 7 p.m., Friday, Nov. 1, at Arlington High School.