Appreciating the beauty east of the Cascades | Arts & Appetite 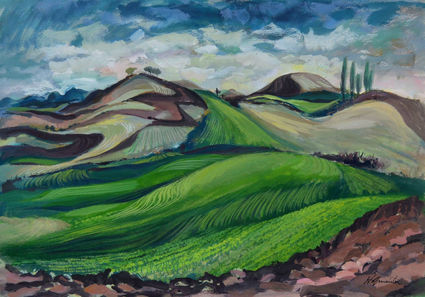 "Palouse Hills," by Andrew L. Hofmeister, can be seen at Cascadia Art Museum.

There are only a few weeks left to catch Cascadia Art Museum's current exhibition, "Paintings From the Palouse: The Art of Andrew L. Hofmeister (1913-2007)," and I highly encourage you to make the time.

Like each of Cascadia's exhibits, this one captures yet another facet of what it means to be in the Pacific Northwest – horses.

Horses, along with scenes of life and landscapes of the Palouse itself, as the region of southeastern Washington and north central Idaho is known.

Hofmeister was born in Montana and became a teacher, but soon moved to Washington in the 1940s to pursue a master's of fine arts at Washington State University, where he taught more than 30 years. Hofmeister painted long after he retired, and this exhibit spans that career so we can see how his art changed over 50-plus years.

His work involves styles that include cubism, surrealism, and utilized a variety of media. Seeing his pieces from the 1940s and early 1950s depicting everything from his dreams to industrial scenes with a cubist take, at the same time as realist and surrealist landscapes, shows just how much he grew and changed in his perspectives.

Moving from "Derricks" in 1946 to "Strange Dreams I Had and In Them I" from 1947, to "Shearing Time" from 1950, display this fantastic variation of his talent over just a four-year period.

Hofmeister's work continued to show a diversity of inspiration all the way through the beginning of the 21st century. Horses show up in expected scenes, but also unexpectedly in more abstract pieces, as in "Churchyard" from the 1950s and in "Sacrifice" from 1963.

Based in the time or the mood or the piece, their equine appearance is explicit or obscured. Some are painted in detail and with much color, while others are created out of the simplest of lines or even a piece of paper cut out of a newspaper and added to a canvas.

His art became so vibrant and engaging in the later years of his career, and as a viewer, you are taken on a journey of discovery studying each piece. A horse appears as a horse but when looked at from another side it part of a man, like in "Cirque Fantasie" from the 1960s.

"Mingled Memories" from 1970 is an expedition on its own, and by 1999 "My Temple" takes the colors from the two decades prior and turns them into a place I would want to visit. If I had to pick a favorite, it would be "Jane's Horses" from 1966 – the colors and the shapes keep you enthralled discovering the scene as it begins to show itself.

Hofmeister seemed to see beautiful moments and images amid both the quiet and the din of life.

"Paintings from the Palouse" ends Oct. 13. Concurrent to the Hofmeister exhibit is a wonderful, smaller exhibit called "Quiet Hour: The Photography of Yukio Morinaga.