A love of shorebird photography leads to keynote appearance 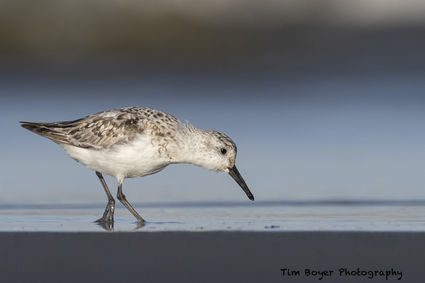 The sanderling is on every continent in the world except Antarctic. Not surprisingly, it's the most widespread shorebird in the world.

He will focus on the epic migrations of shorebirds. He'll discuss six of the 38 common shorebirds found in Washington, explore the transocean migration of bar-tailed godwits, Pacific golden-plovers, sanderlings, and other birds that cross the majority of the Pacific Ocean.

He's a full-time photographer and a graduate of Seattle Audubon's Master Birder Program who shares his knowledge of photography and birds through workshops and presentations. Shorebirds are his favorite family group of birds, and – as you might guess – he spends a lot of weekends on the Washington coast.

Following is an edited Q&A with Boyer, whose images have been published in many bird and nature magazines.

Edmonds Beacon: Tell us briefly about your presentation.

Tim Boyer: This talk is mostly about the global and, specifically, Pacific Ocean, transmigrant birds. There are birds that breed in Alaska and go to Hawaii and New Zealand for the winter – I'll talk about this ultralong migration.

Beacon: What about Edmonds birds?

Boyer: Edmonds has some fall migrants; a few stop by the Edmonds Marsh area. I've been there, and there are a few shorebirds that come in there. But there's not great numbers. And so because I like to follow migrations, I go to places where there's a large number of birds. So I'm at the Washington coast a lot.

Beacon: Your bio says that you need to look beyond the North American borders and see where shorebirds spend most of their lives. Can you explain?

Boyer: If you go to the bookstore and get a bird guidebook, it's only going to show you where the bird is in North America. And so then let's say you have a bird like a sanderling, and it shows you the bird is in Washington almost year-round, and that it nests in the high Arctic.

Beacon: Tell us about your book, "Learn the Art of Bird Photography."

Boyer: It's for beginners to intermediates. It's for beginners just getting started, and it's for birders who want to take better pictures of birds. Most people who do bird photography are self-taught; they don't go to school for it. So this kind of fills in some of the gaps that they might have.

Beacon: What kind of camera gear do you use?

Boyer: I just switched to an Olympus OM-D E-MIX. It's their top of the line, their professional high-end camera. I use that along with a 300 millimeter f/4 lens.

Beacon: You have a lot of YouTube videos on your website. Photography and speaker appearances are your full-time jobs. How did you get into your career? You mention on your website that you were actually working in the corporate world for awhile.

Boyer: I've been a photographer since high school, and a birder since college. The two things combined in 2000. At about that time, I was working in the corporate world and I had enough discretionary income that I could buy the camera gear. And at that time film that was the most expensive part back then.

I lived at Bellingham, and was transferred to Seattle one day. I didn't know anybody in Seattle. So one day I'm reading the newspaper and there's some people at Ocean Shores sitting on the beach with lawn chairs and there's some shorebirds in front of them. I looked at a map and saw I could be there in two and a half hours.

So at 10:30 that morning I was literally on the beach looking for shorebirds. That's how it started.

Beacon: What is the appeal of bird photography for you?

Boyer: I like to challenge myself, and bird photography is one of the hardest things to do in photography. I only take pictures of wild birds for the most part, and you can't control them. You're at the mercy of the weather, the wind, the light. I'm constantly trying to figure out how to get all of those things together at one point. 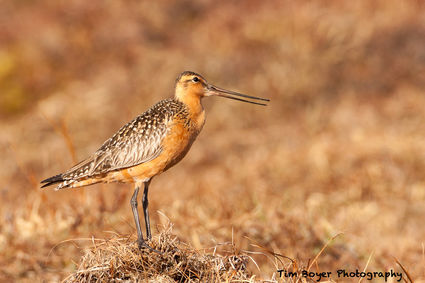 The bar-tailed godwit is among the shorebirds photographer Tim Boyers will focus on during his keynote presentation at the Puget Sound Bird Fest.

Boyer: The number one thing to do is to go out in the first hour after the sun's up. Two things happen then. One is birds are most active because they've been fasting all night. It's breakfast, right? The second thing is if it's a sunny day, the light is low on the horizon and it's a beautiful soft, buttery, warm light in the early morning hours, or the golden hour, as it's sometimes called.

Another thing is to get a sharp picture. Don't worry about how close you are to a bird. If you get a sharp picture and the bird is a little small in the picture frame, that's OK because you can crop it later on. So good light, sharp image.

And even if you're just using an iPhone or a bridge camera (like a Canon T6 or a Canon Rebel) you can get great photos. You don't have to have the high-end gear to take pictures of birds.