A cool find near the Edmonds Marsh 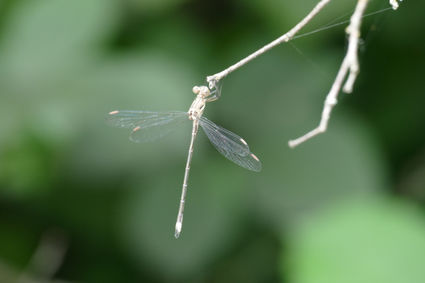 Alan Mearns photographed this California Spreadwing (Archilestes californicus), which had never before been recorded in the county.

On Aug. 17, Edmonds resident Alan Mearns photographed an unusual damselfly – similar to the dragonfly, but smaller, softer and weaker – at the Edmonds Native Plant Demonstration Garden while exploring the vegetated buffer leading into the southeast corner of Edmonds Marsh.

The news: The insect had never before been recorded in Snohomish County.

Another Edmonds resident, David Richman, confirmed to Mearns that it was indeed a species of damselfly, the California Spreadwing (Archilestes californicus). Richman believes there may be more than 500 species of insects in the Edmonds Marsh.