Buckshnis on opponent: ‘You don't know if she can handle stress’ 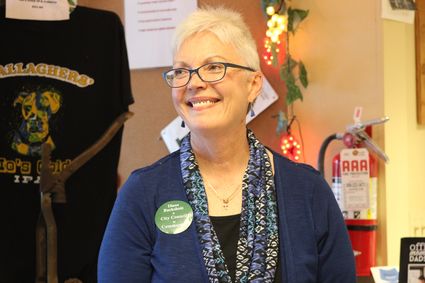 After being appointed to Edmonds City Council in January 2010 after the death of Councilmember Peggy Pritchard Olson, Diane Buckshnis defeated Bob Wilcox and Tad Helke in 2011. Four years later, she ran unopposed.

It was in April that Buckshnis released her campaign priorities, at the Beacon’s request. On Sunday, in front of more than 60 supporters at Gallaghers’ Where-U-Brew in Harbor Square, Buckshnis admitted  with a smile  that her “recycle information” included old promotional material.

That material included a defunct website domain name and a note that “Bob Wilcox is all about construction.”

So although Buckshnis may be surprised at what looks like strong competition from Nand, who has support from the Snohomish & Island County Labor Council, Snohomish County Young Democrats, and the National Political Women’s Caucus, among others, she exuded confidence at the kickoff.

“My record speaks for itself,” Buckshnis told the audience, which included council candidates Susan Paine and Vivian Olson, as well as Joe Scordino, adviser for Students Saving Salmon, and Richard Senderoff, Marjie Fields, and Kathleen Sears, all involved with the Sno-Isle Group of the Sierra Club.

“I know some of you may not like all my votes, but you know, my opponent found three things wrong in the last nine years. That's a pretty good record. My opponent has no record. Everything she says, you don't know if she can handle stress because I can tell you, it does get stressful.”

Here’s a look at what Buckshnis previously said are her priorities if elected for a new four-year term:

Diane Buckshnis does not have a campaign website. Donations can be sent to Committee to Elect Diane Buckshnis, PO Box 613, Edmonds, WA 98020.