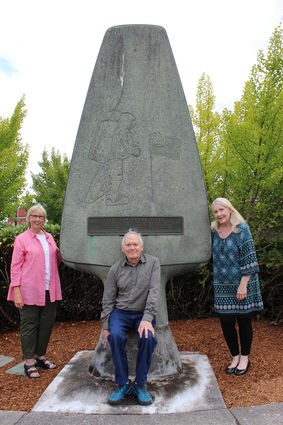 From left: Marcia Fankhauser, Cliff Sanderlin, and Sue Mahoney at the Apollo 11 sculpture at Neil Armstrong Plaza in Edmonds. They shared stories of where they were July 20, 1969.

On July 20, 1969, the world got just a bit smaller when the lunar module Eagle landed on the moon, with Neil Armstrong and Edwin "Buzz" Aldrin stepping on its surface while Michael Collins circled in orbit in the command module Columbia.

For a time, for many, the spectacle of Apollo 11 and man’s first landing on the moon stopped time. Parents gathered children in front of the black-and-white TVs. Others watched in public places.

In Washington state, the Eagle’s landing was recorded at 12:17 p.m. PST, while Armstrong’s first steps followed at 7:56 p.m.