Highway 99 in safety a major concern for Edmonds' transportation plan 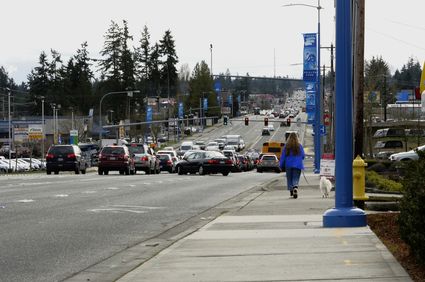 Highway 99 might get much safer in the next few years, thanks to the City’s Transportation Improvement Plan (TIP), which emphasizes pedestrian safety and traffic flow for Highway 99 and other areas in Edmonds.

Approved by City Council on May 21, the plan also includes overlay and crosswalk enhancements to improve pedestrian safety, and other construction projects over the next six years.

One of the big-ticket items highlighted is the Highway 99 gateway and revitalization project, divided into seven segments with a cost of about $180 million, City of Edmonds Transportation Engineer Bertrand Hauss said.

The Highway 99 corridor is a two-mile stretch of state Highway 99 and the land area around it. Parts of this corridor abut the jurisdictions of Shoreline, Lynnwood, Mountlake Terrace, and Snohomish County.

The City’s Highway 99 Subarea Plan project focuses on a community vision and approaches for making long-term improvements to land use and transportation, while also retaining the positive characteristics of many parts of the corridor.

The project could take about 10 years to secure all funding.

“We weren’t expecting the total cost to be that high,” Hauss said. “We are still pursuing that goal, but accidents are happening every day in that corridor because of the high volumes.”

To try and solve this problem, Hauss and his team are pursuing an interim project to improve safety, while also working on the larger Highway 99 project.

“Last year when we did the safety plan, Highway 99 was our number one priority project because it has a lot of accidents due to the high speeds,” Hauss said. “There are about 250 accidents along the Highway 99 corridor annually on that 2.5-mile stretch (in Edmonds).”

The interim project will install raised medians, with a “C-Curb” where there is a left turn lane, as many serious accidents happen when people are making left turns into driveways, Hauss said.

The interim safety project is a “high priority project,” and was recently added to the TIP to address serious injury collisions. It will cost a projected $750,000, Hauss said.

“We want to use a part of that grant to complete this interim project to have a safer project as soon as possible, instead of in 10 years,” Hauss said.

Councilmembers have expressed concern about pedestrian and driver safety on the Highway 99 corridor, particularly with speed limit reductions.

“To me, it’s pretty obvious that drivers may feel that it’s adequate to go 45 mph, but with cars merging into traffic, cars that are crossing, pedestrians crossing and so on, all are having a problem with the speed in Edmonds on 99,” said Councilmember Neil Tibbott.

Phil Williams, City of Edmonds public works and utilities director, responded to councilmembers concerns by explaining how reducing the Highway 99 speed limit from 45 to 35 is probably unrealistic.

“We have to work with the state  it’s their highway, and they set the limits for it,” he said. “Our argument to go to 45 from 35 is not realistic.”

Commitments for the interim project could be a good reason to knock that speed limit down to 40, Williams added.

One speed study done by the state in the corridor showed that 85 percent of cars drove at or under 48 mph. This demonstrated that the comfort level of the driver is around 45 mph, and that’s how the state determines the speed limit for a certain area, Hauss said.

“My big concern is there are still seven lanes of traffic with people dashing across it with no lights and no crosswalks,” Council President Adrienne Fraley-Monillas said. “The sooner we start moving forward, the better we will be in the long run.”

Hauss said he would follow up on the possibility of speed limit reductions for Highway 99.

Among other TIP projects