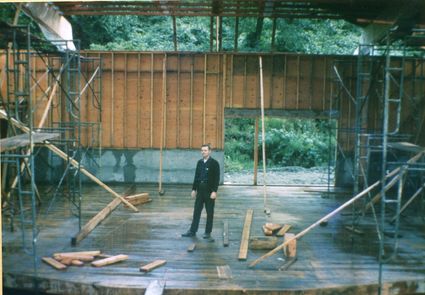 Driftwood Players John Lord, on the stage of the future Wade James Theater in Edmonds.

Edmonds Driftwood Players is celebrating its 60th year as one of the state’s longest running theater companies.

Earl and Nan Prebezac, along with a small group of local actors tired of commuting to Everett to perform and ready to start something local, founded Driftwood Players in 1957.

The group was officially organized April 11, 1958, and the first show was “George Washington Slept Here,” directed by Earl Prepezac, who died in February 2018 at age 93.

During its first decade, Driftwood Players performed at Legion Hall, the former post office on Main Street, and in Firdale Village.

In 1968, Driftwood moved into its permanent venue at 950 Main St., calling it Driftwood Theater. Theater members Wade James and Chet Bennett designed the theater, along with contractor Paul Roy, and volunteers and the city of Edmonds helped finance it. In the 1970s, it was renamed Wade James Theater in honor of James.

“It was really a group of actors needing a place, needing a purpose,” Driftwood board president Anabel Hovig said.

The Prebezacs shared a love for acting that began in theater at Oregon State University. They married and had kids, so Nan put acting on the back burner for a while, Hovig said. Driftwood Players was an opportunity for her to return to the stage.

“I think Driftwood has really been that engine for our community,” Hovig said. “It has served so many people for so many years. Sixty years is just extraordinary.”

Eleven years ago, however, the recession almost forced Driftwood to close. The group had to let some people go, something it had never done before. But because of the perseverance of the volunteers and board members, they pulled through and have recovered well.

“I think we are in what I would call a renewal phase,” Hovig said.

Audience demographics have changed at Driftwood Theater over the years. Traditionally, a large number of local retired people would buy season passes to the shows. Now, however, Driftwood is attracting audience members from outside of Edmonds, including Mukilteo, Seattle, and West Seattle. The theater is also seeing younger people and families at their shows, Hovig said.

Musicals have been packing the house with attendance as well as attracting a people to auditions. Recent musicals included “The Addams Family,” “Something’s Afoot,” and “Dirty Rotten Scoundrels.”

In addition to putting on shows, Driftwood has an extensive summer education program with hundreds of kids participating. When they get older, some of them audition for main-stage productions.

“We are providing a space for artists to perform, to grow,” Hovig said. 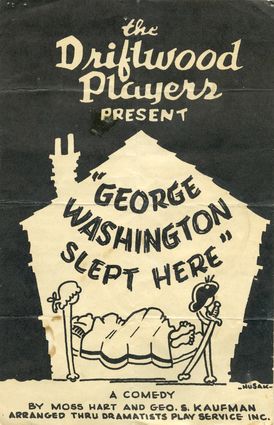 “If you are an actor, you would have to go all the way to Seattle to audition for shows,” Hovig said. “It would be like a really bright light going dark at the top of that hill.”

Driftwood has produced actors who have moved onto television, written books, worked in Los Angeles, and earned degrees in technical theater.

Driftwood Players will celebrate its 60th anniversary 6:30 p.m. Sunday, May 19, at the Edmonds Yacht Club, 326 Admiral Way. It will honor its past successes as discuss fundraising for the future. Co-founder Nan Prebezac will be present. Ticket sales end Friday, May 17  limited tickets available day of event.