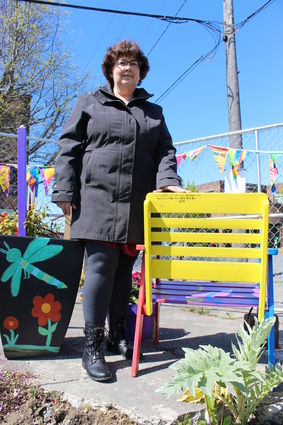 Cindy Locke: It feels good to have people talking about Emilys legacy and how she affected people.

Emily Locke died Dec. 18, but she has not been forgotten.

On Saturday, April 20, a community-based group of artists and art promoters in the greater Seattle area  Art For All: Empowering Artists with Disabilities  erected a temporary installation in the empty lot at Second Avenue South and Main Street in Edmonds.

The lot is the site of a future mixed-use building and Graphite art studio being developed by Mary Olsen and Tracy Felix of Edmonds’ ARTspot.

Emily, who died at age 29 after being struck by her car, was a member of Art for All and frequently attended classes at ARTspot, where she created her works of art. She was also known to many in the community as a courtesy clerk at QFC in Westgate.

Emily had Coffin Siris Syndrome, an extremely rare genetic disorder leading to developmental delays, which left her half-blind and with distinct facial features. Despite this, she was a Special Olympics champion, took amazing photos and generally was a friend to many, many people.

The project to honor Emily started April 18 during Art Walk Edmonds, when several artists with disabilities  who live from Everett down to Seattle  created what Art for All called “Peace Poles,” in addition to garden pots and fabric flags.

On Saturday, they gathered at Art Works, a block away on Second and Dayton Street, to reveal their 30 poles, eat cake, hear music, and share memories of Emily, including a poem she wrote. The installation will be up until June, then the plan is to give some of the pots and poles to the Emily’s family.

Emily’s mother, Cindy Locke, was at the ceremony, as were other family members.

“It feels good to have people talking about Emily’s legacy and how she affected people,” she said. “How we should all act like Emily; we should love everybody the same.”

Cindy said Emily’s creations at ARTspot were just a small part of her full life.

“She was so busy. She was always going somewhere, and it was like, ‘OK, see ya, Em.’ So she’d she go to a photo shoot, or an art event, or go to work. She was touching people all over the place, and it was just, go do you Em, just go do you. And she did. She made friends all over.”