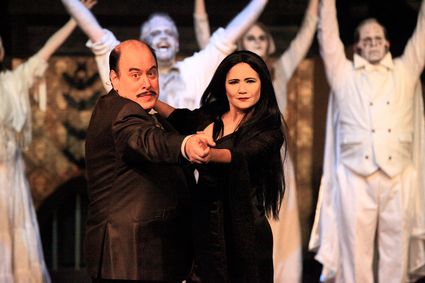 Gomez (Doug Knoop) and Morticia (Tamara C. Davis) dance with their ancestors in The Addams Family  A New Musical.

Edmonds Driftwood Players’ new musical production of “The Addams Family  A New Musical” is a clever, fun, and humorous portrayal of a family known for its dark, antisocial, and odd absurdities.

The story takes place in the Addams family residence, which is oddly enough located in Central Park in New York. Despite the popular location of their estate, the family lives in seclusion.

This hilarious and haunting family dynamic is interrupted when the daughter, Wednesday (Megan Acuna), falls for a “normal” boy named Lucas Beineke (David Naber), who is surprisingly quite attracted to her morbid ways.

Wednesday’s idea of cooking dinner is killing an animal she found at a petting zoo.

Wednesday’s father, Gomez (Doug Knoop), hears of this romance and does his best to hide the news from his wife, Morticia (Tamara C. Davis), who he usually tells everything too. She suspects he’s hiding something, and so withholds marital privileges that are regularly exercised between the couple.

Another romance buds between Wednesday’s Uncle Fester (Richard Wright) and the moon. That’s right, uncle Fester is in love with the moon.

There is apparently a biological connection between the bright, round moon, Fester’s bright, round head, and a white beach ball. In the second act, he plays a ukulele and sings a love song to his beloved rock, “The Moon and Me.”

Under the direction of musical conductor Jay Vilhauer, nearly 30 musical numbers are played throughout the performance. In addition to the witty dialogue, the music and dancing proves to be the strong points of the play.

From the opening number of the ghostly Addams ancestors being released from their slumber amid fog, to the full ensemble cast of “Full Disclosure” to end act one, to the final bows to close the play, “The Addams Family” delivers course after course of singing and dancing delicacies for the audience to enjoy.

Even the usually silent Lurch (Jacob Livingston) surprises everyone with a strong, deep, and booming vocal contribution.

A hilarious and impressive vocal highlight occurs when the repressed Beineke mother Alice (Hayley Baudrau Gaarde) takes a swig of Granny’s medicine and unleashes her true womanly self towards her closed-off husband, Mal (Jeff Strom).

Intertwined with the musical numbers, “The Addams Family” delivers a litany of memorable lines.

“Do you have a little girl’s room?” the visiting Alice asks. “We used to, but we had to let them all go,” the family patriarch Gomez answers.

In another scene, the young boy Pugsley (Catherine Craig) asks his mother to comfort him as he fears losing his sister Wednesday to another boy. “Life is a tightrope, and a coffin is at the other end,” mother Morticia replies soothingly.

The dynamic between Morticia and Gomez is the driving relationship in the play, helping the audience understand that love and trust are just as important in an absurdly dark family as they are in every family.

The black-and-white makeup, haunted mansion environment, and disturbing pleasures the Addams family enjoys do not define them. What does define them is the deep love and trust they enjoy with one another, and the new “normal” Beineke family they invite in.

As is standard fare for Driftwood’s musicals, “The Addams Family” delivers over two hours of engaging musical theater.

"The Addams Family  A New Musical"

When: Through May 5. 8 p.m. Thursdays-Saturdays, 2 p.m. Sundays. Special Saturday matinees April 20 and May 4.