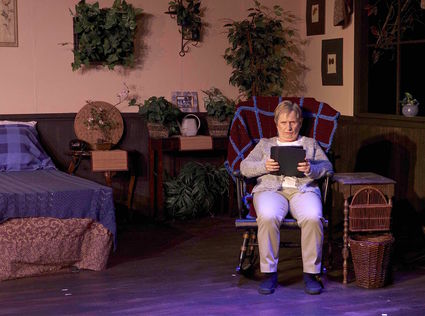 Phoenix Theatre’s presentation of “Ripcord” is a well-paced, funny, and at times very moving story about two elderly women who battle it out with each other to decide who will rule the living quarters of the Bristol Place Senior Living Facility.

The curtain opens at the elderly home. Veteran Bristol Place resident Abby (Melanie Calderwood) finds herself sharing a room with newcomer Marilyn (Susan Connors). The ill-tempered Abby can’t stand living with the upbeat Marilyn, so they begin making a series of wagers to decide who will be queen of the castle.

Throughout this back and forth joust, the stunts range from the ridiculous to the raunchy, and even to the redemptive, as the story unfolds.

James Lynch returns to the stage as the facility caretaker Scotty, playing a role that is both nurturing and goofy. His character is more subdued than in previous roles, where he used much physical comedy, but it worked well for the story that had a surprising amount of visual effects to aid in the action.

Calderwood displayed dynamic range, shifting from silly to grumpy to serious as the story’s lead character. Calderwood often plays characters who are aloof and offbeat, but she displayed her acting prowess in a moving scene with her returned prodigal son.

Under the skilled direction of Eric Lewis, you could experience Abby’s loss and pain as the return of her son (Thomas A. Glass) sparked deep-seated feelings of resentment and distrust.

Susan Connors brought a cheerful and lively flair to the living facility as she teams up with her daughter and son-in-law to bring the ruckus on poor Abby. While Abby and her son represent the negative and woeful aspects of life, Marilyn and her pranking partners represented liveliness and hope.

This dichotomy is displayed in full force when Abby awakens from her drug-induced sleep to find herself skydiving with this thrilling trio.

One of the most exciting elements of “Ripcord” is Chris Brandon’s video projection. At various points throughout the performance, the video screen came down to display scenes in a park, at a haunted house, and most impressively  skydiving.

Video projection is a new element for the Phoenix, and as this play showed, provides an altogether exciting avenue of creative possibilities.

Like his previous work “The Foreigner,” director Eric Lewis wove in enough comedy to keep the show entertaining, yet also incorporated serious drama and special effects to make the play complete. He used strong physical comedy that The Phoenix prides itself on, but mixed it with deep themes of family bonding and loss.

I enjoyed this blend of comedy and drama, and it was refreshing seeing the creative team incorporate video elements into the production. “Ripcord’s” running time is about an hour and a half with an intermission, and passes by at a swift clip.

There are a few uses of strong language and suggestive material, so parental guidance is suggested.