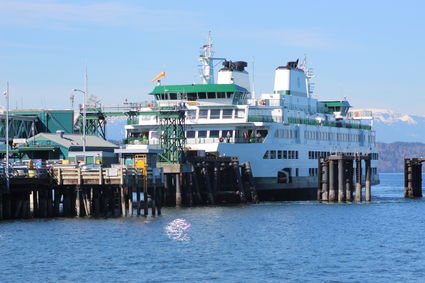 Washington State Ferries newest boat, the 144-car Suquamish, will remain on the Edmonds-Kingston run through the end of the month.

Regular passengers on the Edmonds-Kingston ferry run may be excused for thinking it’s summer already.

Not due to the weather, which has teased us with a few 70-degree days this week.

But as the route is bearing the brunt of downsizing due to a lack of available backup vessels, summertime-liked waits during rush hour and on weekends have become the norm.

Normally, there’s a Jumbo Mark II  the Puyallup, Tacoma or Wenatchee, with space for 202 cars  and a Jumbo  the Spokane or Walla Walla, 188 cars  assigned to the route. For the past few weeks and until the end of the month, however, there’s been a rotating cast of boats filling in.

There’s still the Jumbo class Spokane plying the Sound on its 20-minute trip, but the 144-car Olympics  Washington state’s newest boats  have been covering while the Mark IIs are in for repair or annual Coast Guard safety certifications.

“There’s simply not enough ‘right-size’ boats to go around and no available back-ups,” Washington State Ferries spokesman Ian Sterling said. “And that adds up. So customers can expect longer waits and fuller boats that usual, especially on weekends.”

“I would look at the weekends as a summer weekend rather than a winter one,” Sterling said. (The spring schedule begins March 31.) “If you're traveling during rush hour, which primarily is Friday afternoon and Sunday afternoon, you're going to see some waits. If you're able to delay your trip or walk on, there's always room for walk-on passengers.

“Otherwise, you might go earlier, or later for that matter, or consider taking an alternate route.”

But what could be a pain for some could be nirvana for ferry fanatics, and there are more than a few in Edmonds.

Recently, the Olympic-class Chimacum has filled in admirably. Built in 2017, it’s a 362-foot vessel with comfortable seats, two ADA-compliant elevators and wide staircases that provide access from both car decks to both passenger decks.

On Sunday, the Chimacum was replaced by the Suquamish  which has the same amenities as the Chimacum  which joins the Spokane for the rest of the month. The 144-boat Suquamish is WSF’s newest boat  the 23rd to join the fleet  and began service on the Mukilteo-Clinton run in October.

“The Suquamish tribe put a lot of money into the boat, as far as artwork,” Sterling said. “So you can see custom tables and things like that. It’s kind of neat.”

While Suquamish is the last currently funded new ferry, Washington State Ferries developed a long-range plan to address future vessel needs it delivered to the state Legislature in January.

“The plan recommends building new vessels to replace the oldest ferries in the fleet,” said Amy Scarton, the head of Washington State Ferries. “Just to maintain current service levels, 13 of our oldest ferries will need to be replaced by 2040, and we’re recommending building 16 new vessels in total to continue to provide reliable service.”

It’s all in the Legislature’s hands now.

“I think that we're going to know one way or the other whether the ferry system is building boats in the near future,” Sterling said. “If not, it will probably slow things down by close to 10 years.”